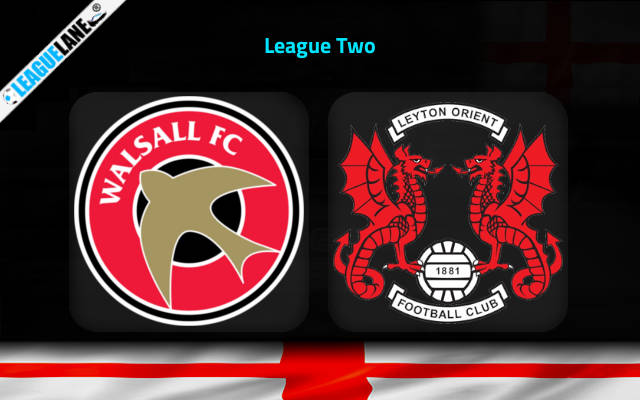 Game week 40 of League Two brings us the match between Walsall and Leyton Orient on Saturday at Walsall.

Walsall played their last match against Salford City. Even though Walsall had scored the first goal of the match, they couldn’t keep the lead. Salford came from behind and scored two goals, ending the match with 2-1 FT score.

Walsall had played with inconsistency in their wins this season, which affected their standing on the league table. However, the team is in-form in the recent matches. The loss in the last match ended the team’s six-game unbeaten streak. They now stand 16th on the league table with 47 points.

Leyton Orient played their last match against Oldham Athletic, in which Oldham scored two goals while Leyton could score none. The match ended with 2-0 FT score.

Leyton’s loss in the last match ended the team’s six-game win streak. The team had trouble with their performance this season. However, their performance has improved in the recent matches. The team now sits 17th on the league table with 46 points from their matches.

Walsall and Leyton have performed similarly in their recent matches. Both teams have shown in their form in the recent matches. The improved form has secured Walsall two wins from the last five matches while Leyton has achieved three wins.

Walsall’s recent home matches have gained some good results. They have won consecutively in the last four matches. Leyton, on the other hand, has not achieved the results they had hoped for in the away matches. The team has only two wins to show from their road trips this season.

I believe the match is more likely to end in a win for Walsall. From the last five matches, Walsall has scored in the second half in three of the matches and can be expected to do so in this match as well.