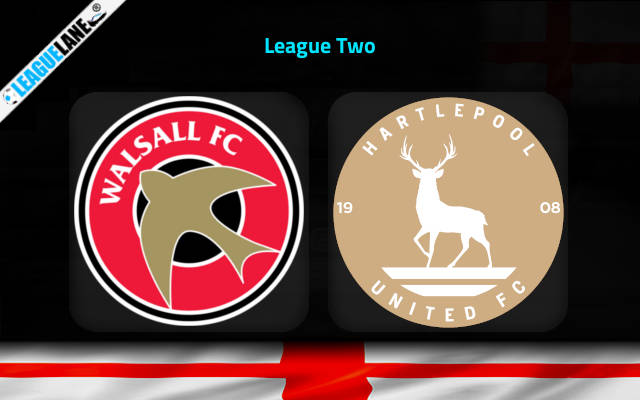 In game week 34 of League Two, Walsall faces Hartlepool United for their next match on Saturday at Walsall.

Walsall played against Swindon Town in their last match, in which Swindon won the match with a large margin. The visitors couldn’t get past the opposition’s defence to score a goal in the match. Walsall lost the match with 5-0 FT score.

Hartlepool United played against Colchester United in their last match. Colchester had started the scoring in the first half of the match and took the lead. But Hartlepool scored two back-to-back goals, taking the lead. They maintained the lead until the end of the match, achieving a win with 1-2 FT score.

Walsall’s 2-game win streak came to an end with their loss in the last match. They have not been on their best performances recently. The two matches they won are the only wins they have in the last ten matches. The remaining matches have ended in loss for the team. Their recent performance has put the team in the 17th position on the league table with 35 points.

Hartlepool has shown improvement in their matches recently. The team currently has an ongoing five-game unbeaten streak and will look to keep this streak going with a win in this match. Their streak has helped the team move up the table to 12th position and they have earned 44 points from their matches.

Walsall has not been on their best performance recently. They have lost in most of their recent matches, which has affected their standing on the league table. Hartlepool has shown an improvement in their form and in their current form, they will be a difficult opponent for Walsall to overcome.

Even Walsall’s home matches have not produced the results the team had hoped for while
Hartlepool is unbeaten in their last four away matches. I believe the match will end in a win for Hartlepool. They have scored most of their goals in the first half of the match and can be expected to do so in this match as well.