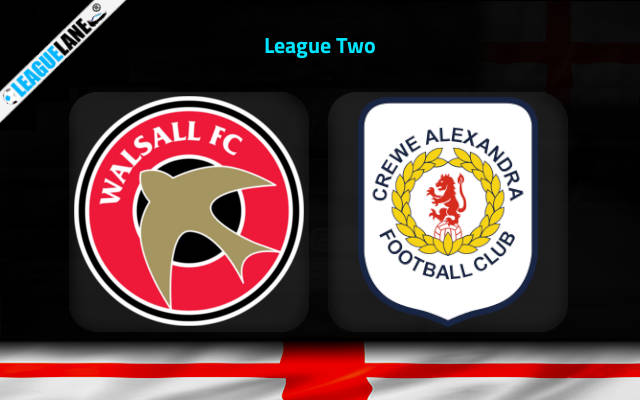 Walsall vs Crewe Predictions and Free Tips from our expert tipsters when the teams go head-to-head in League Two on Saturday, 17 December 2022.

Crewe lost to Newport recently, this defeat comes after two back-to-back victories. The team led by Lee Bell are currently at the seventeenth position on the table.

Meanwhile, Walsall have picked up good form in the last two months. They defeated their rivals Doncaster in their most recent outing. The last time they lost a league match was way back in October. Another interesting fact is that they have the third-best defensive record in the league this campaign.

Three of the last five head-to-head meetings have ended in a stalemate. Both teams last met back in 2020 and the visitors won that game by 2-1.

The host are unbeaten in six of the last eight encounters at Bescot Stadium.

Who will win the match between Walsall and Crewe?

Even though the visitors have a decent winning record against this team. They are struggling to win this season. Do note that the host are on a four-game winning streak at home in the league.

Also, the visiting team are winless in three of their last five outings.

The host have scored two goals in their last two home wins. They have also scored in four of the last five overall head-to-head matches.

Both teams will most likely score. This is after considering that at Walsall’s home ground both teams have scored in the last ten meetings. With just one exception which was during the 2013/14 season.

The first tip is that Walsall will win this game – at 1.85 odd. They are on a three-game winning streak since late November. Also, Crewe’s away form is riddled with losses. They have lost three of the last five away fixtures.

Furthermore, our second tip is that both teams to score – at 2.00. We can back this tip as these two teams have scored consistently in the last ten meetings at Bescot Stadium with one exception.