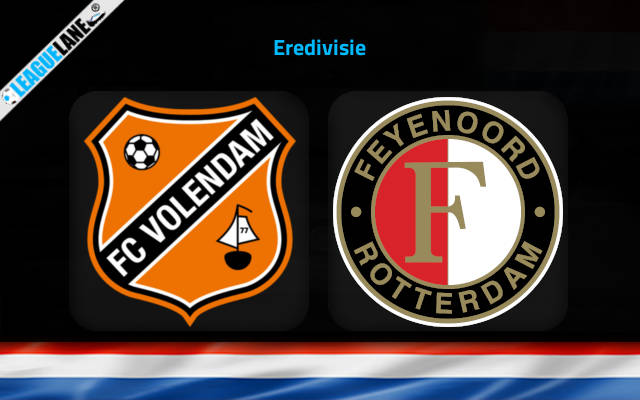 Feyenoord return to the domestic league action after missing the previous weekend’s round as they take on the rock-bottomed FC Volendam on Sunday afternoon away at Kras Stadion.

Feyenoord are huge favorites going into the tie. They are just four points shy of leaders Ajax at the moment and have a game in hand on them.

Arne Slot’s troops dropped the ball by playing only a 1-1 draw to Fortuna Sittard in their previous Eredivisie action two weeks ago.

However, they still boast a fantastic offensive record with 27 goals in 11 matches. Slot’s men won four, drew one, and lost one of six away fixtures in the league this season.

Danilo Pereira has been the main catalyst to the team’s successes so far in the campaign with seven goals to his name.

The Brazilian forward will have a nice opportunity to keep shining on Sunday since his team are up against the worst defense in the league.

No other team in the Dutch elite class have shipped more than FC Volendam’s 33 goals this season.

The team led by Wilhelmus Jonk took just two points in the last nine league matches. They suffered a 2-1 defeat away at AZ Alkmaar seven days ago despite playing the entire match with an extra player on the pitch.

FC Volendam do not have enough quality to stay competitive in the top flight of Dutch football. They are now set to face one of the league’s heavyweights and we can’t predict anything other than a comprehensive victory for the visitors.

The main pick will be Feyenoord to win both halves at the odds of 3.00, while you will hardly make a mistake backing Danilo Pereira to score anytime for the visitors at the 2.00 odds.