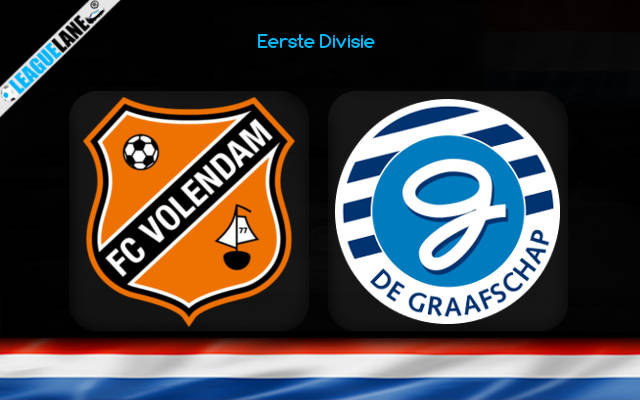 Volendam seems to be in a trouble with their form in the recent matches. The team has not won in the last six matches. They had played well in their matches from the start of the season itself until their hiccup in the most previous matches. However, the team still stands second on the league table with 65 points from their matches.

Volendam played against Jong PSV in their last match, in which both teams scored two goals each one after the other. The match ended with 2-2 FT score.

After continuous winless matches, De Graafschap found their first win in six matches when they faced Eindhoven. The team has got mixed results in their recent matches. From the last ten matches, the team has got two wins, five draws and three losses.

De Graafschap played their last match against Emmen, in which both teams scored one goal each. The match ended in a draw with 1-1 FT score.

Volendam has found themselves in a hiccup with their performance in the recent matches. They are winless in the last six matches. Graafschap too had little trouble in their past matches. Currently, the team is unbeaten in the last two matches and will hope to keep the streak going.

Volendam had played well in their home matches until their recent appearances. Their last two matches have ended in loss for the team, which they will hope to break. De Graafschap has played well in their away matches. The team has got five wins from the last ten road trips.

Even though Volendam has shown the trouble with their form, they can’t be taken lightly. They can get back in-form at any time. So, I believe the match will end in a win for Volendam or in a draw.