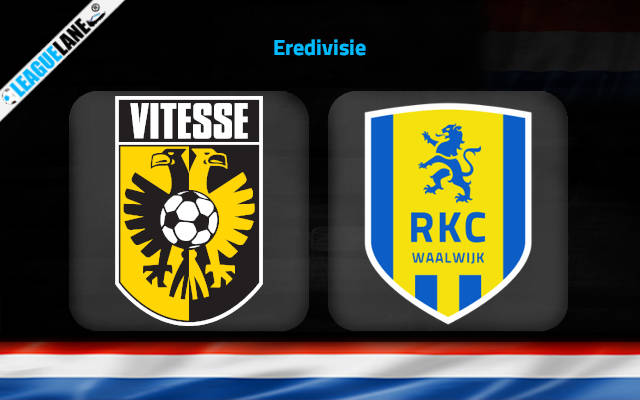 Vitesse Arnhem’s performance has been disappointing of late, as they have won just once of their 7 most recent league clashes. They have been unnecessarily drawing games as of late but they are still in the Conference League Play Offs spot.

RKC Waalwijk has been struggling recently, with the side failing to gain a win since the last 7 games across all venues. They are only 2 points safe from relegation and hopes to turn the tables as they travel to GelreDome this weekend to face off the Vites for the 27th Round of Eredivisie.

Vitesse is in the 6th spot on the standing with 41 points from 25 games. They won 12 times in the league while drawing on 5 and losing on 8 other occasions. They scored 32 in total while conceding a sum of 38 which shows some improvement in defense is needed.

The home side will play in this match following a goal-less drawn game against Heracles which took place last week. Over their past six fixtures, Thomas Letsch’s men have found the net a total of 8 times gaining an average number of goals per match of 1.33.

On the flip side, RKC resides at the 14th position on the table with 24 points. Of the 26 matches played, they won 5 games while drawing on 9 and losing on 12 other occasions.

Previously, RKC Waalwijk had also drawn to 0-0 with Heerenveen in the prior league schedule. They still have some defensive errors as they have seen scoring against on 5 of their last 6 games, giving opponents 12 goals in total.

We anticipate a win for Vitesse as they are unbeaten in the league by RKC in their previous 5 h2hs. Moreover, the visitors are also without a win away from home in their last 3 matches in the league.