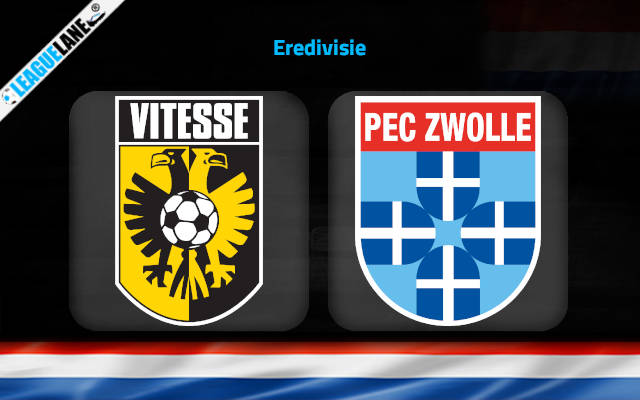 With 24 points apart, Vitesse is in the zone for Eredivisie Conference League Play Offs while the Bluefingers is at the bottom of the table in the zone for relegation to Eerste Divisie. With a much needed win more than any other team on the table, Zwolle and their travelling fans take a road trip this Tuesday to GelreDome to schedule a meeting with the hosts.

The hosts resides at the 5th spot on the table with 30 points in hand. Of the 17 matches played, they won 9 of them while drawing another 3 games. They lost on 5 other occasions with conceding almost the same numbers as scored ones marking at 24:25.

Games involving Vitesse have shown plenty of goals in action as of late. Over the course of their past 6 league fixtures, they netted 15 times while conceding a total of 7. After 2 back to back wins against Heracles and Cambuur, they drew the last game against Sparta Rotterdam by 2-2.

The guests are at the rock bottom in the relegation group at 18th spot. From the 17 games so far, they have lost on 13 fixtures while drawing on 3 and winning only once. They only have 6 points, being the lowest in the league along with more than thrice the conceding numbers than the scored ones standing at 9:31.

Dick Schreuder’s FC Zwolle have conceded a total of 11 goals while scoring only 3 times in the past half a dozen league fixtures. They are unable to find a win in the past 7 Eredivisie games, with the latest loss being to FC Twente by 1-3.

Coming into this fixture, Vitesse are unbeaten in their last 3 league matches at home while FC Zwolle have not won away from home in their last 10 league fixtures. Also with 2 past h2h wins, Vitesse are the sure favorites to win this game against the nethermost away team.