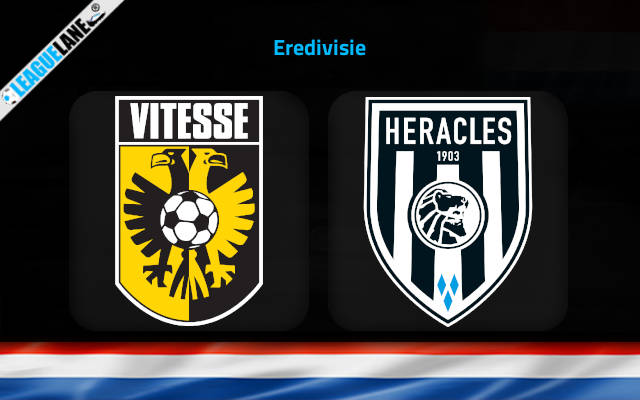 Everything points towards a comprehensive clean-sheet win for the hosts here. Vitesse won three of the last five league games. They notched six goals in the away thumping of Cambuur last time out. They are up against dreadful travelers. The home win is well worth backing at the 1.72 odds.

Vitesse offered their best display of the season last Saturday when they bagged six goals in a demolishing away win at top-half rivals Cambuur.

The team led by German manager Thomas Letsch completely dominated the pitch from the first to the final whistle.

They registered as many as nine shots on target on the occasion, their by far best attacking performance of the campaign.

Vitesse are now fifth in the Eredivisie ladder and they will be hoping to back up this victory with another success on Sunday afternoon when Heracles come to visit GelreDome.

Heracles are nowhere near their rivals’ form. The visitors lost three games on the spin in the league.

Frank Wormuth’s men have been struggling badly for goals of late. They found the back of the net just once in the last three matches.

The latest of the failures came eight days ago when Heracles lost the home fixture to Heerenveen (0-1).

Heraclieden have one of the worst away records in the entire league. They took only one point from seven league fixtures on the road this term, netting just five goals along the way.

Tips for Vitesse vs Heracles