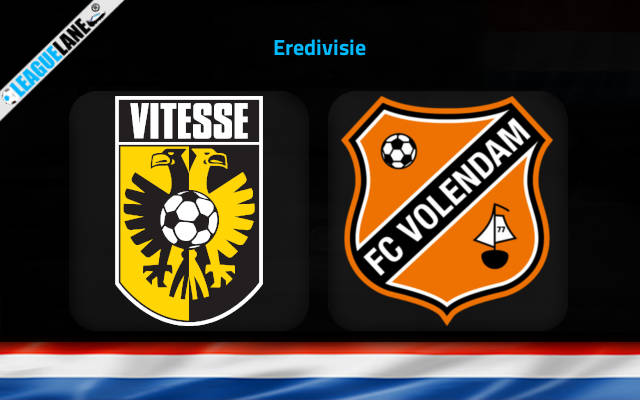 Supporters of Volendam are very concerned this season, the team is struggling early in this campaign. They will now travel to GelreDome to clash with Vitesse this Saturday.
It is interesting to note that both teams share the same statistics this season. Both of these teams have only won one game so far. Also, 66% of their matches have ended in defeat.

It is evident that Wim Jonk’s side are having a disastrous season this year. They are on a losing streak of three games in the league. The defence is very fragile as they have conceded fourteen goals in just three games.

In their last league outing, they suffered a narrow 3-2 defeat against Go Ahead Eagles. Robert Muhren scored a consolation goal in the 97th minute of the game.
Meanwhile, the host also have a similar story to share. This season they have only managed to win one game out of six outings.

In their last match, they registered five shots on goal against Utrecht. However, they were unsuccessful in finding the back of the net.
The recent form is showing that Thomas Letsch’s team have lost three of their last five games this season.

In the Eredivisie this season, Volendam have conceded the most number of goals. The defenders are not performing as they have conceded twenty goals in just six matches.

It needs to mentioned that a total of ten goals have been scored in the last two meetings between both clubs. Therefore, spectators can expect a goal-fest in this upcoming fixture.

Wim Jonk‘s side sits just three points off the foot of the table, with their leaky defence a major worry as they are yet to keep a clean sheet in their last three matches.

Therefore, our prediction is that be Correct Score will be Vitesse 4-0 – at 17.00 odd. This is after considering that in the last two meetings between both sides, the scoreline was 5-0 and 4-1 respectively for Vitesse.

Also, our next tip for this game Nikolai Baden Frederiksen to score anytime – at 1.90 odd.
He has scored two goals in his last five appearances.