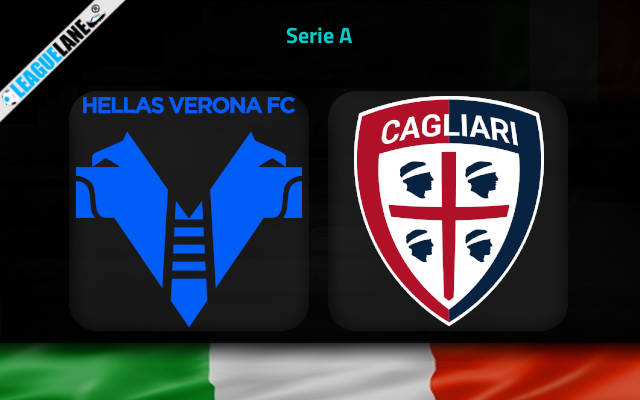 After surviving relegation by 3 points in the 2020/21 season, Cagliari once again find themselves in the thick of a relegation scrap. Verona on the other hand seems to be stuck in 10th place in the league, a position where they finished at the end of last season.

These teams are set to face one another at the Stadio Marc’Antonio Bentegodi this Tuesday. Read our Preview, Predictions, and Betting Tips with Analysis here.

Verona’s previous match ended in 3-1 defeat against Sampdoria on the road while Cagliari were able to hold Salernitana, another team in the relegation zone to a draw, with whom they are currently level on points.

The Islanders have suffered throughout the season having not been able to spark momentum in their league run this season. The team has managed just one win in the season, with draws on 5 other occasions, the team is currently 19th in the league with 8 points.

While they have managed to find the back of the net frequently, it is the defence that is letting them down having conceded the 2nd most goals in the league.

The Mastiffs kicked off the season with 3 consecutive losses, the team has managed to put their season back on track losing just twice since. With 5 wins and 4 draws they are 10th in the table with 19 points to their tally. They are just 2 points behind Fiorentina who are 6th in the league.

Despite the slow start to the season Hellas Verona have been unbeatable at home in recent times. They are on a 5 match winning streak in the league in home games, despite welcoming Italian powerhouses such as Juventus and Roma during that period. Expect them to seal a dominant win when they face a side that has taken just 2 points on the road this season.

Giovanni Simeone has been tearing apart Serie A defences recently, he is currently the league’s joint 3rd highest goal scorer having made 11 goal contributions already. The Italian has scored 7 goals at this venue in the last 3 games, I don’t see any reason why one shouldn’t put the money on him to find the back of the net in this fixture.