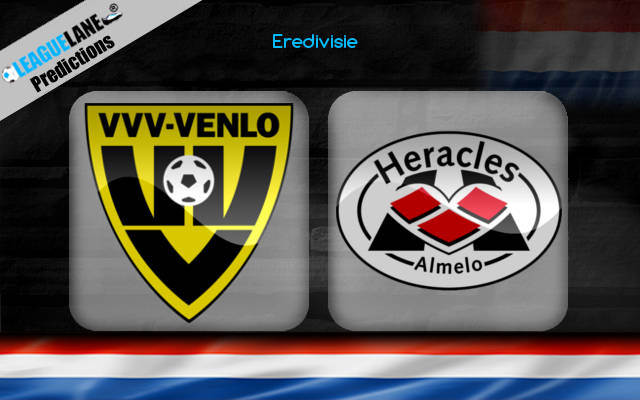 VVV’s ship keeps sinking in Dutch Eredivisie. After getting humiliated by Ajax, losing the game at home venue 0-13 FT, squad from Venlo tied one more defeat to their name against Groningen.

They hosts have dropped to 14th place, so hopes & expectations from upcoming clash against Heracles are very moderate.

Heracles are doing slightly better in terms of standings and form, which was obviously enough for the bookies to make them warm favorites at 2.25 odds to win the match.

These two teams have met 34 times in the past and stats are heavily going in favour of the visitors. Heracles were successful in 19 encounters against VVV, seven duels ended without a winner, while squad from Venlo celebrated eight victories.

The score at this stadium is tied at seven victories each, with 44 goals scored total which averages 2.58 per duel.

The most recent h2h took place at this same stadium in February. VVV have won it 1-0.

VVV and their fans are still waiting to celebrate the first victory at home venue. So far they had three attempts which resulted in one draw and two losses. Offensive line hasn’t been productive here either, scoring only two goals. Interestingly, VVV bagged eight goals in four away days.

Their best goalscorer and player overall is 26-years old Greek striker Giakomakis. He added six goals to his name so far in seven appearances. No one could have predicted such bad run for VVV after beating Emmen in the first round 5-3 FT.

Heracles have picked up some solid form lately. They were successful in the national cup, beating Telstar 3-0 at home. The follow up match was amazing as well, dismantling Utrecht 4-1 in Eredivisie. The main reason why we don’t think away team is going to win here is their record on the road, failing to secure one Eredivisie victory in the last ten attempts.