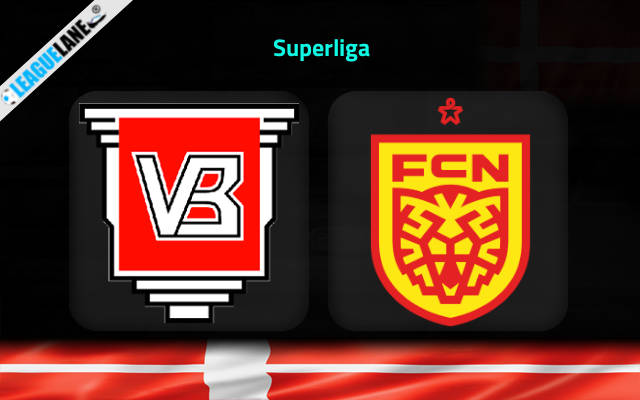 With 7 points and lying one above the other in the Relegation Group, Nordsjaelland will be taking a roadtrip to Vejle Stadion, this Monday to meet the relegation fighting Vejle.

Nordsjaelland is at the 10th spot on the table with only 25 points from 25 games. They won 6 times in the league while drawing on 7 and losing on a dozen other occasions. They lost twice of their last 5 fixtures and have been conceding quite often in the league which shows some improvement in defense is needed.

The visitors go into this game after a 2-0 Superliga over Sonderjyske in their previous match. They have seen scored against in 5 of their last 6 matches, letting opponents get 8 goals in all. Nordsjaelland have seen conceding 2 or more goals in 9 of their last 10 away matches

On the other hand, Vejle resides at the second last spot closing the 11th position on the table with a mere 18 points. Of the 25 matches played, they won 4 games in the league while drawing 8 times and losing on 15 other occasions. The hosts are currently on a 3-game winless run in the league and need at least 8 points to escape the red zone.

Vejle BK will be hoping for a better result following a 2-1 Superliga loss in their previous game against Odense BK. Ivan Prelec’s men have hit the back of the net 5 times in their prior 6 outings. At the other end, the tally of goals that they have conceded in those same games amounts to 6.

Heading into this fixture, Vejle remain undefeated in their last 6 home league matches. They have also seen scoring 2 or more goals in 6 of their past 10 home fixtures. Also they won the last h2h played at home.

Therefore, taking all these aspects into account, we feel that a home win seems quite likely.