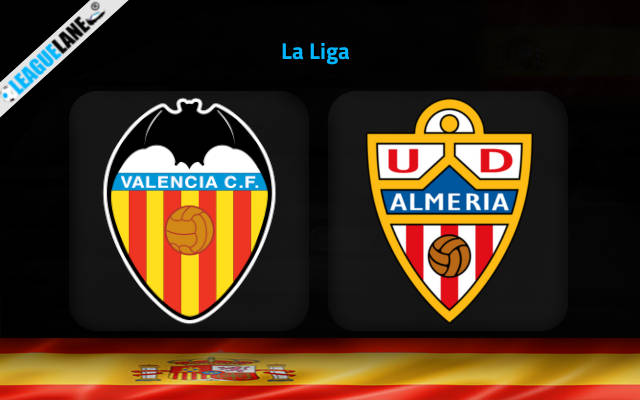 Valencia vs Almeria Predictions and Free Tips from our expert tipsters when the teams go head-to-head in Spanish La Liga on Monday, 23 January 2023.

Valencia have been trying their best to shake off their struggling form, and go for a spot in the top half of the table. And it seems that they have a good opportunity coming up this Monday, as they are pitted against an inferior opponent.

Almeria have easily been the worst team on the road in the whole of the Spanish La Liga this time around. They have a 100% losing record away from home, barring just two draws.

Valencia have a terrific h2h record against this rival over the years. In fact, they have a perfect winning record since 2015, and an unbeaten record in the last ten years. They also scored two or more goals in every single h2h clash in the past ten years.

Do also note that they lost just once in the past 15 years.

Who will win the match between Valencia and Almeria?

As mentioned before Valencia have a great h2h record against this opponent – that stretches back 15 years. And while they have not been amongst the best in the La Liga this season, they used to be in previous years.

On top of that, Almeria last recorded a win back in November, and they have a 100% losing record on the road barring two draws.

Chances are very high for Valencia to deliver a winning performance.

Both teams are struggling with their defense at the moment, and are letting in goals in huge numbers. In fact, Valencia have a single clean sheet at home in the past four months.

Going on, Almeria have a single clean sheet in all competitions this season, and the last they managed to keep a clean sheet on the road was back in May.

On top of that majority of h2h encounters also have goals in huge numbers.

All of these point towards this upcoming fixture turning into a goal-fest.

Even with a dominant h2h record, seldom have Valencia managed to deliver good defensive performances. In fact, they conceded two or more goals in every single h2h encounter in the last 12 years.

And with their defense still searching for form, it is expected that the visitors will find the back of the net at least once. And as such, the Both Teams to Score wager looks very promising.

Valencia are at home, and have a great h2h record against this rival over the past 15 years. On the other hand, Almeria were promoted to the top flight only at the end of the last season, and they have been the worst team on the road this season in the La Liga.

For the reasons, the Valencia to Win at an odd of 1.67 would be the optimal bet.

Going on, both teams are struggling with their respective defenses, and are letting in goals in huge numbers. Previous h2h encounters also show this same trend, and add to that the fact that the two squads are under intense pressure.

Likely, the combo of Over 2.5 Match Goals and the Both Teams to Score would be a great tip for Monday at an odd of 2.40.