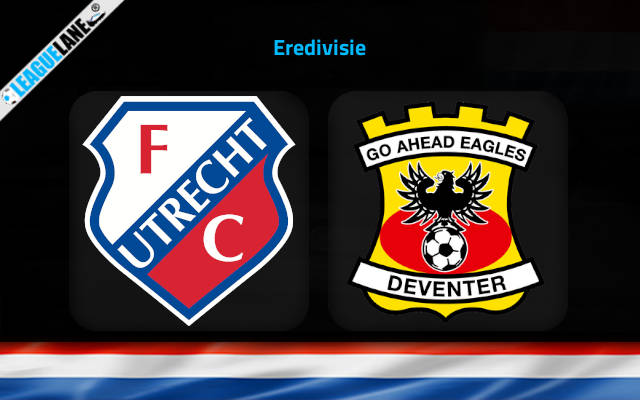 Utrecht have been impeccable both offensively and defensively at home so far in the season. We clearly see them as strong favorites against Go Ahead Eagles. Anything but a commanding victory for the hosts would be a surprising result here.

Utrecht vs Go Ahead Eagles Head-to-head

Utrecht got an early lead last weekend at Philips Stadion but only to concede four goals in what ended up as a tough 4-1 defeat away at PSV.

While the result may seem horrendous, it is fair to say that Utrecht were unlucky to concede four goals from six shots on target in Eindhoven.

Anyways, Rene Hake’s men return to Stadion Galgenwaard on Saturday afternoon when they host recently-promoted Go Ahead Eagles in the 16th round of the Eredivisie.

Utrecht lost three of the last four league outings but they have a fabulous record at home this season.

Hake’s troops won six and drew one of seven league fixtures on the home patch this term. They have scored as many s 22 goals in 7 home outings this term (more than three goals per match on average).

Go Ahead Eagles have not done anything spectacular of late to convince us they have any chance to snatch points from Stadion Galgenwaard here.

Go Ahead Eagles lost two of the last three league fixtures and they have played the likes of Groningen, Willem II, and Twente in the process.

Tips for Utrecht vs Go Ahead Eagles