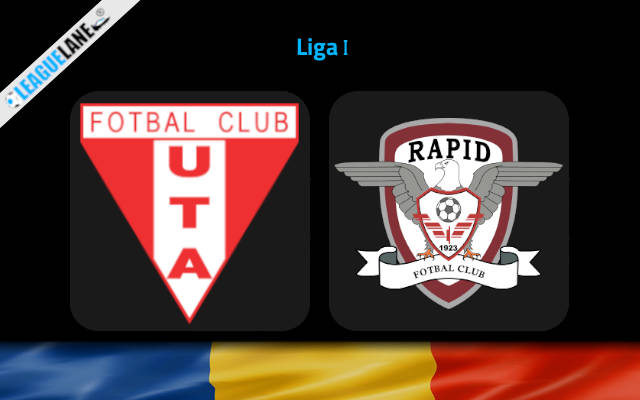 UTA Arad vs Rapid Bucuresti Predictions and Free Tips from our expert tipsters when the teams go head-to-head in the Romania Superliga on Sunday, 18 December 2022.

UTA Arad have been going through a disappointing stretch of performances lately. They are on a winless run for 10 games and will be having lowest of spirits to enter the next league outing.

Meanwhile, Rapid Bucuresti is having a decent form since the beginning of this season. They are on a three-fixture unbeaten streak an will be hoping to secure their spot inside the safe zone by bagging points consistently.

Rapid Bucuresti can also rely on the recent tradition since they won the previous two encounters against UTA Arad. They are on a six-fixture unbeaten streak at present.

At this venue, UTA Arad is having a three-game winless streak. The latest match-up at this stadium had finished in a 0-2 win for Rapid Bucuresti.

Who will win the match between UTA Arad vs Rapid Bucuresti?

UTA Arad is a team that is struggling for a victory even in their safe turf. They are on a seven-fixture winless run at home, and adding that up with their inferior head to head form, we expect a victory for Rapid Bucuresti.

The attacking side of UTA Arad have managed to score at least one in their recent home matches. Since three of the last four road trips of Rapid Bucuresti saw the landing of over 2.5 goals ft, expect that trend here.

Rapid Bucuresti have allowed goals in their past six league fixtures. Its on rare occasion that they have recorded a clean sheet in this season.

UTA Arad on the other side have managed to score even in the games they lost of late. Therefore, expect goals from both ends on Saturday.

By the looks of things, we expect a victory for the away side Rapid Bucuresti. Backing them to win at 2.45 odds is our first pick for this one.

For the second pick, we like to place the both teams to score option at 2.10 odds considering the current defensive side of both.