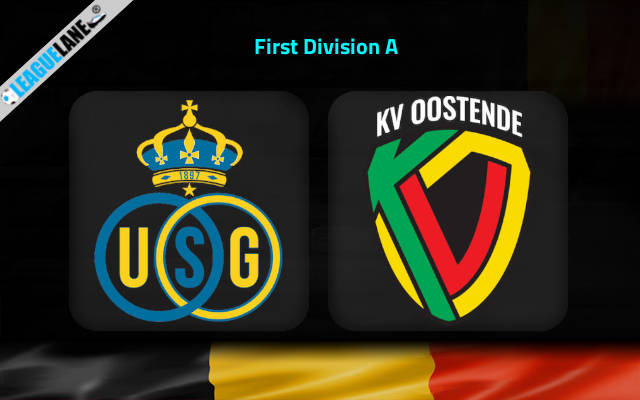 Union St. Gilloise and Oostende will lock horns for the second time in the last six days, following their clash in the last 16 round of the Belgian Cup last Tuesday.

The hosts came on top back then thanks to a late winner from Simon Adingra who set the final score at 2-1 with seven minutes to go.

It is worth noting that Union St. Gilloise did not shine at all in that game, scoring two goals from their lone two shots on target six days ago.

The two outfits will now face each other in the 18th round of First Division A and the hosts enter the tie as massive favorites once again.

If you look at the numbers, everything do indeed point towards their success on Monday. Karel Geraerts’ men are second in the league ladder at the moment. They have the second-best attacking record in the competition with 35 goals scored in 17 outings.

Union St. Gilloise are now up against the third-worst defense in the division as only Zulte-Waregem and AS Eupen have conceded more than their 37 goals so far in the campaign.

The visitors hold the 14th position at the moment and they have a dismal away record of one win, two draws, and six losses in nine league fixtures on the road.

This is the match between the second-best attack and the third-weakest defense in the league. We will go with Union St. Gilloise to win & Over 3.5 goals FT pick at the 2.62 odds.

Those who are chasing big longshots can try with Union St. Gilloise to win 4-1 at the attractive 17.00 odds.