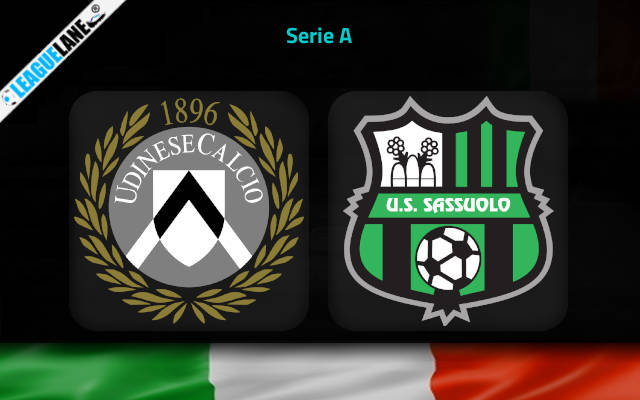 Udinese drew in four of the last five league games and we see a stalemate as the most likable of the three outcomes here. It also happened in three of the last six head to head matches between these two outfits.

Udinese ended their four-draw run last weekend when they fell 2-0 away at Inter Milan. It was the eighth consecutive Serie A game without a victory for Luca Gotti and his troops.

The Italian manager could have his job on the line in case of another failure on Sunday afternoon when Udinese play host to bottom-half rivals Sassuolo.

Neither of the two teams have been enjoying a strong spell of form lately and we can’t expect a beautiful game packed with phenomenal moves and goal-scoring opportunities.

After all, each of the last four games Udinese played ended with fewer than three goals scored. Three of these four matches produced the identical 1-1 scoreline.

Sassuolo do play a more attacking football than their counterparts, but they did not shine at all in the previous round’s 1-2 home loss to recently-promoted Empoli.

The defeat came as a shock result after a 1-2 victory over Juventus in Turin. It is, however, worth noting that Sassuolo had been winless in three subsequent league matches on the road before beating Juventus away at Allianz Stadium.

Tips for Udinese vs Sassuolo