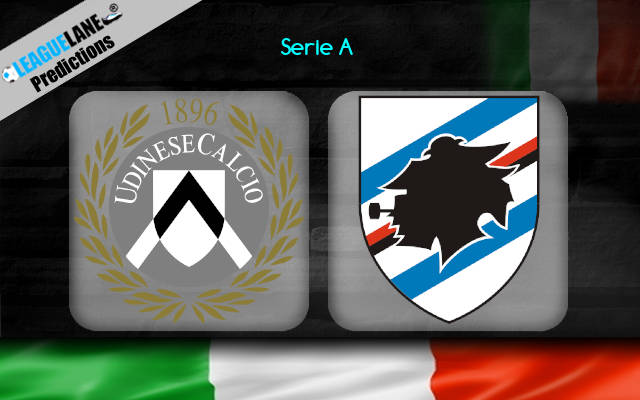 Udinese and Sampdoria were both on the wrong ends of five-goal drubbings within the last seven days. They will be looking to fix the impression with a result on Sunday afternoon when they come across each other in a mid-table Serie A clash.

Udinese continued their slide down the Serie A ladder with a demolishing 5-1 defeat at the hands of Napoli on Tuesday evening.

They’ve thus halted their push for the top-half finish by clinching just one point from the last three league affairs.

The team led by Luca Gotti currently holds the 12th position. They are three points shy of the 10th-placed Hellas Verona and need a win here to stay in contention ahead of the final day.

Sampdoria are 9th at the moment and they will very likely finish the season at this position. The visitors can’t go up and they are hardly going to drop the points in the last game of the season against the rock-bottomed Parma next weekend.

Even a defeat here leaves Sampdoria at 9th place ahead of the final day fixtures because they have a better head to head record over Hellas Verona who are their lone serious threat for the ninth-place finish (currently three points below them).

Both teams lacked defensive meticulousness in the last several months. Udinese did not keep a clean sheet in ten straight league matches, while Sampdoria shipped as many as seven goals in the last couple of outings against Inter (a 5-1 loss) and Spezia (a 2-2 draw).

We thus have reasons to expect the continuation of a high-scoring trend in head to head matches between the two outfits. The Over 2.5 goals FT & Both Teams To Score pick looks more than attractive at the 2.20 odds.