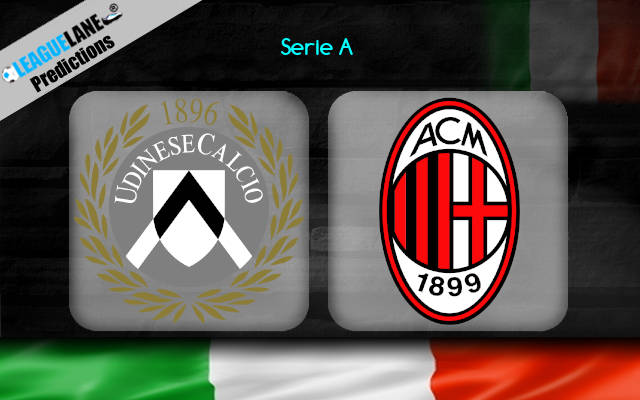 AC Milan have been in great shape and travel to Udine as Serie A table-toppers, earning 13 points in five games as they kicked it off with four wins and a saw a thriller 3-3 draw against Roma on Monday. They’ve been in great shape up front and will hope to build on the streak, led by in-form Zlatan Ibrahimovic.

Rossoneri beat Sparta Prague (3-0) with confidence in Europa League on Thursday and bounced to their 14-match winning streak seen beforehand. They’ve thus scored two or more goals in all of their last 16 outings and Udinese could certainly have their hands full, despite having picked it up themselves lately as well.

Udinese come into the match on the back of a 3-1 Coppa Italia win over Vicenza. They scored eight goals in three outings since the International break, beating Parma (3-2) at this ground too and suffering a similar loss at Fiorentina (3-2) last week. We now hope to see an exciting challenge at Dacia Arena too but we don’t really see it enough to snatch the points at this point, as the visitors seem furious and very motivated to show off once again.

Udinese beat Milan (1-0) in their last head-to-head clash at Dacia Arena, where Rodrigo Becao made all the difference.

AC Milan returned the favour in front of the home fans, turning a five-goal thriller their way (3-2).

Rossoneri bagged 28 wins in 56 games, where the last trip was also their only loss in six matchups.

We will now back AC Milan to build on a great start at Dacia Arena and keep hold of the top spot in Serie A with all three points, where an Away win comes at 1.75 and looks like a solid approach to the fixture on Sunday. Udinese have been better lately but we don’t feel they have what it takes to deny the in-form visitors.

Still, it will be no walk in the park. We believe Rossoneri will have to outgun the rivals if they’re to secure the points. With that in mind, we’re going for an exciting game with goals on both ends and backing Over 2.5 Goals FT and a YES on Both teams to score – which combines to an enticing 2.00.