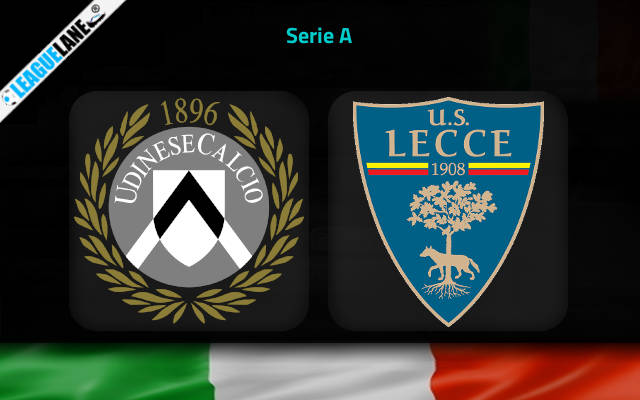 Udinese will be hoping to return to winning ways after four successive winless affairs on Friday evening when they host Lecce in the first game of Matchday No 13 in Italian Serie A.

Andrea Sottil’s men ran into a crisis after a phenomenal spell of form at the beginning of the season.

They continued it last weekend with a disappointing goalless draw away at recently-promoted Cremonese.

The fact that it was an evenly-matched outfit throughout the 90 minutes of play says enough about Udinese’s current form.

The hosts come into this tie with Lecce as pretty big favorites but there is not actually much to suggest a positive scenario for them on Friday night.

Lecce have one of the worst attacking lines in the competition and they have won just one game since the beginning of the season.

However, the team led by Marco Baroni are also well capable of defending well. They have only allowed 15 goals in 12 outings which is more than decent for a side that has won just one game in the entire campaign.

Lecce fell 0-1 at home to Juventus last Saturday in a match in which they were completely inferior team on the pitch.

The visitors have failed to find the back of the net in two successive league outings and we would not be surprised to witness the continuation of such a negative trend for them on Friday evening.

There is little value in backing the hosts to win at the 1.57 odds. We very much see this as a close affair with very little clear-cut openings, especially for the visitors who did not create much at all offensively in the recent weeks.

We will thus take the 4.33 odds for a draw at the half time and Udinese’s win at the end, while you can also take the Under 0.5 goals in the first half at the 3.00 odds.