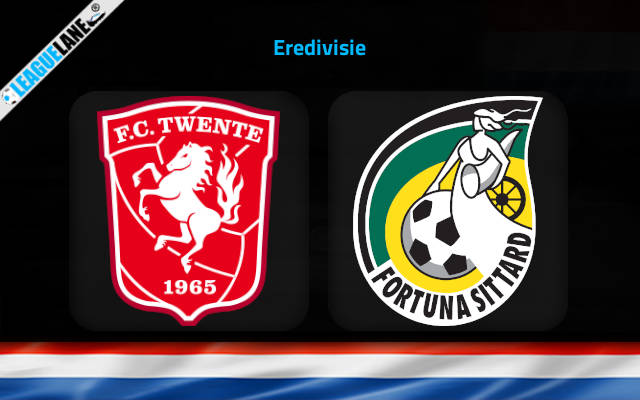 The hosts are hoping to catch Feyenoord in the battle for the third place in the league table and a spot in the UEFA Europa League next season.

It is a big longshot since Ron Jans’ men are five points behind Feyenoord with just three games left to spare.

Nonetheless, they will come into this tie as big favorites to dispatch Fortuna Sittard who have a battle of their own to fight in the remaining three rounds of the season.

The visitors are three points clear off PEC Zwolle who hold the relegation playoffs spot at the moment.

Enshede is clearly not a place where you can expect to clinch salvation points because Twente have lost only a single game on the home turf so far in the season.

Moving forward, Fortuna Sittard have shown much better performances at home than on the road throughout the season which is why the home court advantage should play a massive role in this tie in particular.

Last but not least, Twente will come into this on the back of three wins and two draws in the previous five league outings.

They have conceded just a single goal in the previous three Eredivisie ties and have generally been very tough to break down in their own backyard over the whole season.

Twente have been the dominant force in the history of this matchup at De Grolsch Veste where they won six and drew three of the previous nine meetings with Fortuna Sittard.

Nonetheless, it is worth mentioning that Fortuna Sittard have won each of the last two H2H encounters with Twente, including this season’s 2-1 victory in mid-August last year.

We’ve seen at least three goals in five of the previous six head to head matches between these two rivals.

Fortuna Sittard have the worst defensive record in the whole league with 64 goals allowed in 31 games so far. They are particularly weak on travels where they won 2 and lost 10 of 15 matches in this term of Eredivisie.

With a record of 9 wins, 5 draws, and only 1 defeat in 15 league games on the home patch, Twente are very hard to beat at De Grolsch Veste. We will back them to win by two or more goals difference at the odds of 2.10 here.