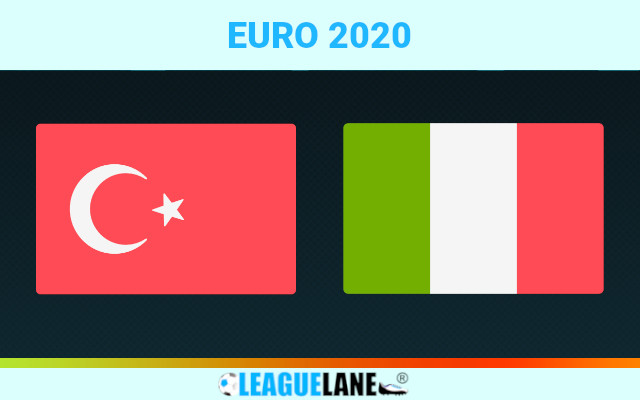 The Euro 2020 finally kick-off with Turkey and Italy locking horns at the Stadio Olimpico in Rome.

Italy has a clear home advantage in the group phase with their games being played in Rome. Combined with their impressive form in recent years, they are hot favourites to top the group with Wales and Switzerland being their other two opponents.

Turkey has grown into a tough unit since the last European Championship and they have a habit of surprising big boys. The 4-2 win against Netherlands in March is an example, while France and Germany had to settle for a draw.

Despite the positives, the Crescent-Stars can be unpredictable which may prevent them going deep into the tournament. But qualification from Group A is certainly on the cards and this will be the first target for Senol Gunes.

Italy is entering the tournament on the back of red hot form having won 8 matches on the trot with clean sheets.

Roberto Mancini’s men have a long standing unbeaten run with their last defeat coming in the 2019 Nations League campaign against Portugal (0-1).

There have been 27 matches since and they marked their 22nd win against Czech Republic (4-0) in the only warm up match last Friday.

Many pundits are tipping Turkey as the dark horses of the tournament on the back of some impressive results in the last 2 years.

They are unbeaten this year, starting off with wins in World Cup qualifying games against Netherlands and Norway and wrapped up the warm-ups with a 2-0 win over Moldova to make it 4 wins and 2 draws in the calendar year.

Marco Verratti is the only player in the Italian camp struggling for fitness after a knee injury last month. He is most likely to sit out for this match with the likes of Manuel Locatelli and Nicolo Barella standing up in recent weeks as viable replacement options.

Upfront, Ciro Immobile is set for a start alongside Lorenzo Insigne and Domenico Berrardi, all three players coming after impressive 2020/21 Serie A seasons.

Senol Gunes has no injury problems and Burak Yilmaz is expected to lead with the support of Bundesliga duo Hakan Çalhanoğlu and Kenan Karaman.

The four men defense is completed by Caglar Soyuncu and Merih Demiral flanked by Umut Meras and Lille’s Mehmet Celik.

Italy are unbeaten in the 10 overall h2h meetings with Turkey with 7 wins and 3 draws.

Their only previous meeting at the Euro happened in 2000 in the Netherlands and the Gli Azzurri bagged a 2-1 win. Guess who was on the scoresheet, former Juventus, Inter and Chelsea manager Antonio Conte.

Their last three meetings, which are the only meetings since the 2000s saw both teams getting their name on the scoresheet.

There will be some nerves at the start for sure, but these two teams are filled with quality players in every department and neutrals are in for a treat.

Do we need more to kick-start a tournament like Euro 2020?

The fluidity of football is certainly with Italy and I can see either of Immobile or Insigne getting on scoresheet here, while Burak Yilmaz is a big threat for Mancini’s men.

I will go with Italy in this Euro 2020 opening match, one factor that gives them a slight advantage is the experienced players. If both coaches get their tactics right and strikers keep their composure, we will see some goals at either end as well.

Thus, I go with Italy to win here, but only by a narrow margin in a potential high scoring thriller.

Read all Euro 2020 Predictions and Tips at our main page