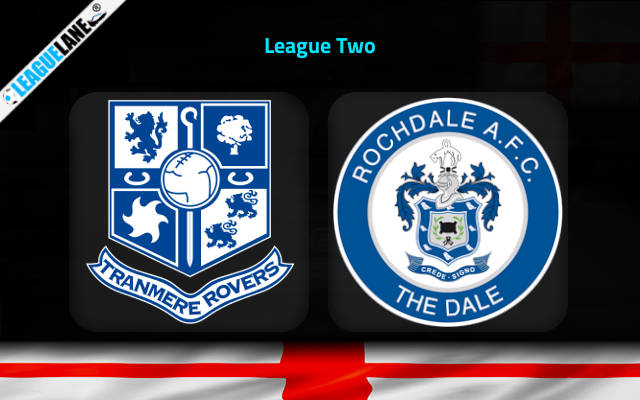 In game week 27 of League Two, Tranmere Rovers face Rochdale for their next match on Saturday at Birkenhead.

Tranmere Rovers stay in the second position on the league table with 42 points from 24 matches after their last match against Salford City. The match ended in a draw after Tranmere scored a 70’-minute goal. The match ended with 1-1 FT score.

With the draw in the last match, Tranmere’s unbeaten streak has gone up to eight games. Their last five wins have ended with a clean sheet for the team as well. The team has achieved 12 wins in their league matches this season and six of them came in the last ten matches. They have also scored without fail in their last eight matches as well.

Tranmere has performed well in their home matches. They have played 12 of their league matches in home ground and have only had occasional losses. They are a tough team when they play in their home ground. Goals were scored in most of the home matches and they have won in nine of the matches as well. Currently, the team is on a 4-game win streak.

Rochdale stands in the 17th position on the league table with 27 points from 22 matches. They played their last match against Newport County. The match ended in a win for the team with 3-0 FT score.

The second placed team is a tough contender for the oppositions. They have played well throughout the season and have only lost in a few matches. They also have the advantage of playing in their home ground where they have put on a good show for the fans. The team at the bottom half of the table will have a tough time in the match.

With clean sheets in the last wins, Tranmere has defended their post well and could do so in the next match as well. I believe the match will end in a win for Tranmere and they will be the leading team in both the halves.