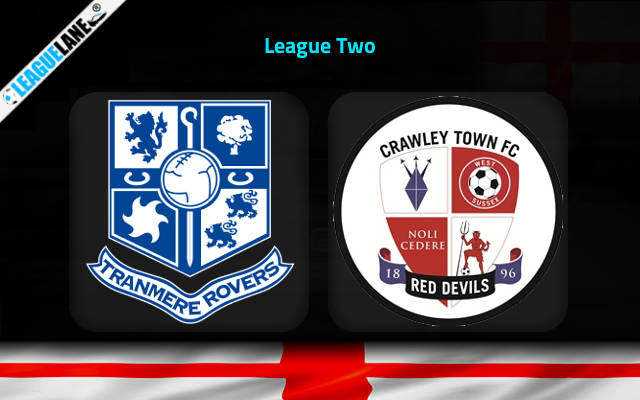 Tranmere vs Crawley Predictions and Free Tips from our expert tipsters when the teams go head-to-head in League Two on Saturday, 17 December 2022.

Tranmere are not keeping up this season. They are on an eight-game winless run. They need to start delivering winning performances this month if they want to reach the top half of the table.

At the same time, Crawley conceded their tenth defeat of the season as they lost to Hartlepool by 2-0. It is worth knowing that the visitors are yet to win an away fixture this season. This is what Tranmere will take advantage of.

The host are on a three-game winning streak against this team. Both these teams last met in January this year and the host won that game by 1-0.

They have a good record at Prenton Park as they are unbeaten in five of the last six meetings.

Who will win the match between Tranmere and Crawley?

Tranmere have a better chance to win this fixture. The main reason is that Crawley have not won any of their away fixtures this season.

At the same time, they have lost nearly 50% of their league matches this season. The host are unbeaten in three of their last five outings as well.

We can expect over 2.5 match goals combined. The main reason is that the previous record shows that in three of the last four meetings at Prenton Park at least three goals have been scored.

This fixture rarely lacks goals. Both teams have scored in three of their last four head-to-head meetings at this ground. Therefore, we expect the same trend to continue this time as well.

The host are on a three-game winning streak against this team. This new trend started from 2021. Therefore, the first tip is that Tranmere will win this game– the odd for this tip will be at 1.80 odd.

Our second tip is that Over 2.5 goals with both teams to score– at 2.50. Both teams have scored a combined total of nine goals in two of the last three matches at Prenton Park.