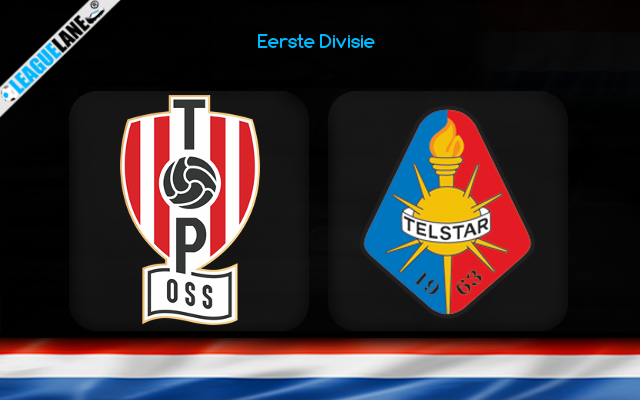 TOP Oss vs Telstar Predictions and Free Tips from our expert tipsters when the teams go head-to-head in the Dutch Eerste Divisie on Friday, 6 January 2022.

Telstar have only lost once in the last 10 league outings. An often recording of a drawn outcome affected their positioning in the table. However, they have managed to seal a win in the previous league outing against Den Bosch.

They will have a good chance of sealing a win on Saturday as they faces TOP Oss, who is the second worst team in the league at present. Oss is at the 19th position in a table of 20 with the possession of a disappointing attacking and defensive side.

Telstar is on a six-fixture unbeaten streak against TOP Oss. The latest meeting had finished in a 2-2 draw.

At this venue, the guests are having an undefeated form for the last three encounters. Four of the last six matches at this stadium saw fewer than 2.5 goals ft.

Who will win the match between TOP Oss vs Telstar?

Telstar were unbeaten in five of the last six road trips. Despite of being the travelers, they have managed to remain unbeaten at this venue against Oss for the last three matches.

Knowing that Oss lost four of the last five home fixtures, we have enough of reasons to expect a win for Telstar.

TOP Oss have failed to score in three of the last four home matches. On the other side, Telstar has the least number of over 2.5 goals ft recordings in the whole competition.

Do also note that four of the last six h2h matches at this stadium had fewer than 2.5 goals. Therefore, we expect an affair with under 2.5 goals here.

Since TOP Oss have failed to score even in their home games, we quite don’t see the value of backing both teams to score bet at 1.73 odds.

Considering all these observations, we expect a win for Telstar and like to place it as the main betting option at 2.15 odds. For the second tip, we like to place the under 2.5 goals bet at 1.95 odds.