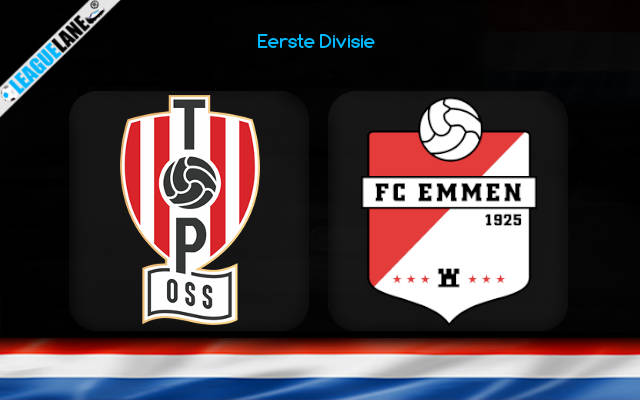 In the last 10 encounters between both these sides in the Eerste Divisie:

The hosts currently sit in 16th position in the league table with 10 points on board after 10 league games as they have lost 4 times and drawn once in their last 5 league games.

TOP Oss come into this fixture on the back of a 2-1 loss away from home to FC Eindhoven in the Eerste Divisie in a game which saw Justin Mathieu score a second half goal.

On the other side of the field, the visitors, Emmen currently sit in 6th position in the league table with 16 points on board after 10 league games as they have won four times and lost once in their last 5 league games.

Emmen come into this fixture on the back of a 1-0 loss at home to Excelsior in a game which saw them have 66% of ball possession where they had 15 attempts on goal with just 5 of them on target.

Taking the above into consideration, we back the odds at 2.05 for the visitors, Emmen to seal a victory and all 3 points in this fixture. They have been a consistent side so far this season as they will be eyeing this fixture against TOP Oss to win and climb up the ladder.

Consequently, we back the odds at 1.57 for both teams to get on the score sheet in this game. The hosts will be eager to get a win or even a point as they are languishing down the table. Hence, they will come out with an attacking approach to the game which should see both sides scoring.

Tips for TOP Oss vs Emmen