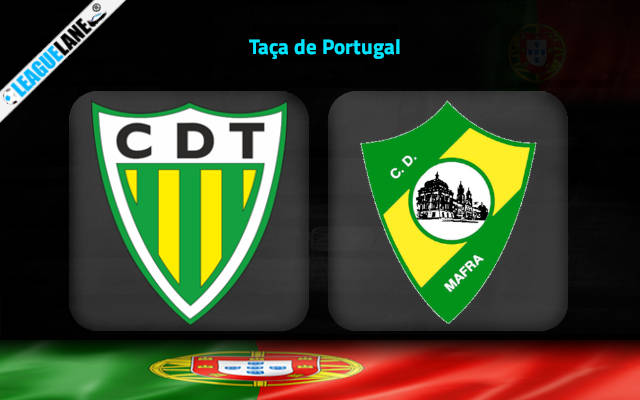 Tondela is on a severe downfall in Liga Portugal as they have now gone 4 back to back league defeats previously. Sitting third from the bottom, they are in the zone for relegation.

Mafra is a mid table contender in Liga Portugal 2 and are on a 3 game undefeated run in the league.

The two teams got advanced from the Quarter finals of Taça de Portugal and will be meeting at Estádio João Cardoso for the first-leg of Semi finals where C D Mafra will be visiting.

They never met each other across any of the competitions so far.

The Gold and Greens cleared the round of 8 after a victory over the Estoril by 3-1. They then got advanced into the Quarter finals with Rio Ave who had previously defeated the Primeira Liga opposition Belenenses by 2-1. Their clash ended in favour of Tondela where it went to extra time and ultimately secured a hard fought 1-0 win.

The hosts’ 4th consecutive Primeira Liga loss came at the hands of Famalicao by 1-2. They are 16th in the league with only 6 wins from 24 games played. With only 20 points, they are the ones with most number of losses in the league with 16.

On the contrary, round of 8 for Mafra was scheduled against Moreirense where that match ended in 3-1 and the former paved their way into the Quarter finals against the Portimonense who previously defeated Famalicao. Their encounter ultimately saw 4-2 in the end with the LigaPro favorites secured a victory with the help of two penalties.

The visitors drew the latest league fixture to Penafiel by 1-1 ending their back to back LigaPro wins. They are 8th in the league from playing 24 matches. Winning on 8 and drawing 9 gave them 33 points so far in the league.

Tondela are on a terrible home run recently, losing in a triad on succession. They lost 4 from the last 5 fixtures alone while winning only once. Mafra won the last away game ending their 3 consecutive away losses.

We feel that a draw is likely to happen in the first leg as the home team is lousy at home while the second tiered away opposition are also average on road. Therefore a clear cut winner is highly unlikely to emerge this Thrsday.