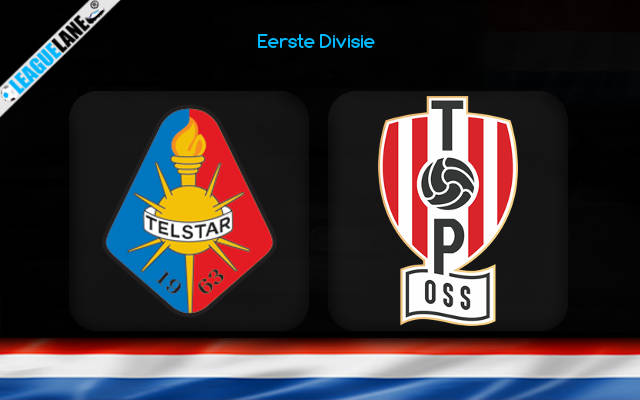 In game week 29 of Eerste Divisie, Telstar faces TOP Oss for their next match on Friday at Velsen-Zuid.

Telstar played against Helmond Sport in their last match. Both teams scored two goals each one after the other ending the game in a draw with 2-2 FT score.

TOP Oss played against Jong Utrecht in their last match. TOP Oss scored four goals in the match even before Utrecht scored their only goal of the match. Utrecht’s goal, by the end of the match, stopped Oss from gaining a clean sheet. The match ended with 4-1 FT score.

Telstar has not achieved the results the team had hoped for in their matches. Their form has been inconsistent throughout the season, which resulted in the teams finding wins in only few matches. They currently stand in the 13th position on the league table with only 28 points to their name. From the last ten matches, the team has scored in only seven of the matches and could find wins in only two of them.

TOP Oss has shown some improvement in their form since the start of December. The team has scored in nine of the last ten matches and has found wins in five of them. Their recent performance has helped the team move up the table to the 12th position. From their matches, the team has earned 30 points as well. They hope to keep their form and earn wins in their matches.

TOP Oss has played well in their recent matches when compared to their performance at the start. Telstar has been inconsistent in their form and currently is on a cold streak for the last three matches.

Telstar’s home matches have not been as productive as the team had hoped it would be. The team has gained mixed results in their home matches. TOP Oss is in a similar state in their away matches as well.

Looking at the recent performances, Oss has played better than Telstar in the matches, making them the most likely choice in winning this match. Both teams have scored in most of their recent matches and can be expected to score in this match as well.