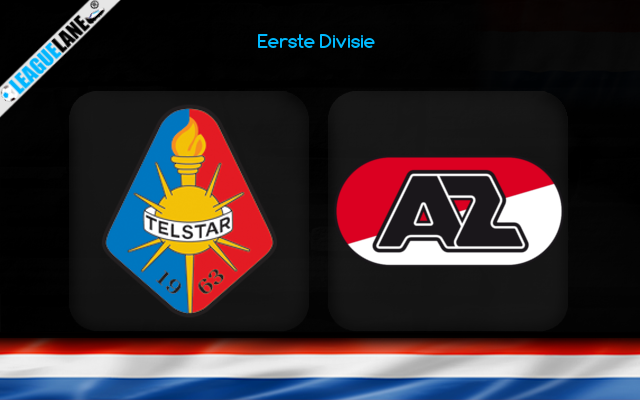 Telstar vs Jong AZ Alkmaar Predictions and Free Tips from our expert tipsters when the teams go head-to-head in the Netherlands Eerste Divisie on Friday, 13 January 2023.

Telstar have been recording inconsistent displays since the beginning of this season. They have won five, drew seven and lost six of the total 18 matches played so far.

Meanwhile, Jong AZ Alkmaar have been also recording inconsistent outcomes lately. They are on a three-game winless streak. Alkmaar is three points and four spots above Telstar in the standings at the moment.

Telstar have a 100% unbeaten record against Jong AZ Alkmaar barring a single fixture. The reverse fixture finished in a goalless draw.

Who will win the match between Telstar vs Jong AZ Alkmaar?

Telstar follows a five-game unbeaten streak at home. Three of them were drawn fixtures. However, it wont count much against this Jong AZ Alkmaar side, who have lost three of the last four road trips.

On top of that Telstar have a superior head to head form against Jong AZ Alkmaar at this venue. Therefore, expect a win for Telstar on Friday.

Telstar have a good goal-scoring form against Jong AZ Alkmaar. We expect them to score at least two considering their goal trend in the h2h tradition.

Going on, it is worth mentioning that Telstar have a weak defensive side which have leaked goals at a rate of over 1.5 per game. Therefore, expect an over 2.5 goals ft display here.

Both teams are capable of entering the score-sheet here. We don’t expect a one-sided affair here for all the reasons mentioned earlier. Thus, expect a both teams scoring match on Friday at Rabobank Ijmond Stadion.

We are expecting Telstar to maintain their unbeaten h2h run against Jong AZ Alkmaar. Backing them at 2.10 odds is our main betting pick here.

Goals are likely to come from both ends of the pitch on Friday. Instead of backing both teams to score option, we like to place the over 2.5 goals at 1.67 odds considering the goal trend of both sides.