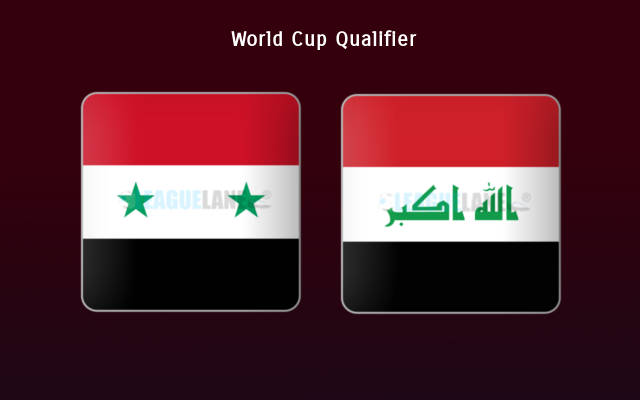 Neither Syria nor Iraq are enjoying a decent form since the beginning of this Qualification stage matches. Both these outfits will meet each other at Al Rashid Stadium on Tuesday evening.

Syria have been disappointing since many games and their current form offers nothing less than the bottom position of the Group A table. They have the worst defensive side while their offensive recording looks decent.

However, they have recorded their first win this Qualification stage so far in their previous match against Lebanon away from home. They scored three goals in that match and succeeded in preventing goals from the opposition well.

Meanwhile, Iraq sits a position above Syria on the table. But they are yet to record a victory so far in this World Cup Qualification stage. They owns a worst offensive side and a disappointing defensive side.

They played a 1-1 draw against Lebanon in their most recent qualification fixture. They will be prepared themselves to arrest the current slump by recording a positive display against Syria who sits at the rock bottom of the table.

However, Syria will be eliminated from the World Cup race after this game. If Iraq fails to seal points from their next fixture against the third spot occupier UAE, they will also join Syria to the way out.

Iraq have managed to record some unbeaten fixtures against teams who sits top of Syria on the table. They are also unbeaten in three of the past 5 on road fixtures.

On the other side, Syria lost four of their past five home fixtures leaking two or more goals. Also they have only won once against Iraq in their head to head meetings excluding friendlies.

Therefore, we are expecting Iraq to stay here with the hope of finding a spot inside the promotion zone by sealing points against this Syria outfit.