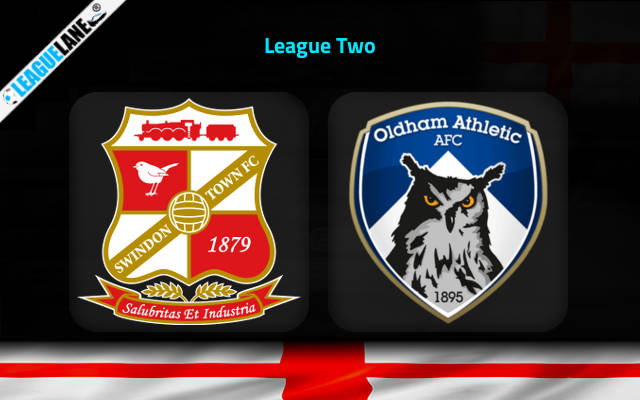 The Robins are in the last spot of Play Offs after winning on their previous league schedule. They won 4 times from the last 5 games and have netted once or more in their last 8 home games across all competitions in a row. Oldham Athletic are in the relegation zone after their last loss in the league. They have managed just 3 wins in their last 16 league games and has been drawing quite often. With 24 points and 15 positions apart, the Latics will travel to County Ground in Swindon this weekend for the 36th Round of League Two.

The Robins are at the 7th spot on the standing with 55 points from 34 games. They won 15 times in the league while drawing on 10 and losing on 9 other occasions. They scored 57 in total while conceding a sum of 41 up to this point.

Swindon Town go into this encounter after a 2-1 league win against Bradford City in their recent fixture. Three or more goals per match were seen on all of the past 6 meetings where they have been involved. Opposition teams scored 6 times in this period while the hosts totted up 14.

On the flip side, Oldham Athletic resides at the 23rd position on the table with only 31 points. Of the 33 matches played, they won only 7 games while drawing 10 and losing on 16 other occasions.

The visitors come into this on the back off a previous home loss against Carlisle by 1-2. In their previous 6 clashes, Oldham have helped themselves to the sum of 11 goals and have also scored on each one of those occasions. Over that period, they’ve seen 9 goals go past them.

Swindon Town haven’t been beaten in the league by Oldham in their last 6 matches meanwhile the visitors are without an away win for the past 3 league fixtures. Therefore we feel that a home win is likely to occur this weekend.