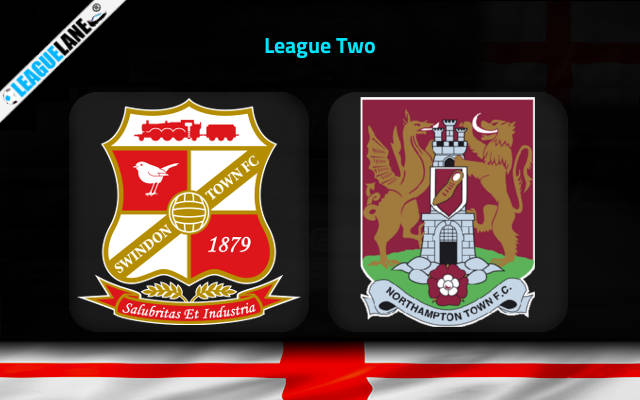 The Cobblers is in the zone for Play Offs at the 2nd position on the table with 40 points. Of the 21 matches played, they won on 12 games while drawing on 4 and losing on 5 other occasions. Their total goals to conceding ratio stands at 29:17 which shows that the attacking front needs to be improved.

Northampton Town have been scored against in 5 of their last 6 games, seeing their opponents hit 6 goals in total while they bagged up a sum of 9. They are unbeaten in the last 5 games having won 4 straight matches in a row with the latest being against Harrogate by 2-1.

The Robins is at the 7th spot, which is the last Play Off spot on the table with 34 points. They won 9 times in the league while drawing on 7 and losing on 5 other occasions. They have scored 29 in total while conceding a sum of 24 from the 21 games played so far.

Swindon Town have seen their defense breached in 5 of their previous 6 clashes, shipping 10 goals in the process. After suffering 2 defeats against Leyton Orient and Barrow, they drew the last league fixture against Stevenage by no goals to spare.

Previous matches between the two has averaged 2.33 goals while BTTS has happened 78% of the time. Northampton Town has enjoyed playing away from home recently, with the side currently unbeaten in 3 games.

We anticipate an away win this weekend as Swindon has won only twice at home while the visitors are excellent at away schedules winning 7 out of 10 away games with the back of 4 consecutive league wins.