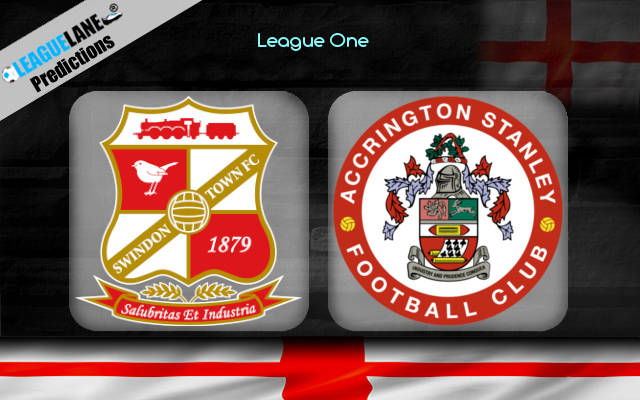 Accrington Stanley narrowly escaped relegation last season, but they made a promising start this term and look solid after the 1-0 away win against Northampton on Saturday.

They played only 8 games so far, 3 less than the others, yet picked up 5 wins while losing the other three.

They will be looking to register another win at Swindon Town, the promoted team who lost 6 of their 10 games so far. However, their overall stats is the contribution of poor accolodates on the road, win-less in 5 out of which 4 are defeats.

Their home record is decent as they won 3 of the 5 games the most recent is a morale boosting 2-1 victory over the high flying Hull City. Therefore, this will not be an easy game for Accrington Stanley and the head-to-head stats reaffirm the same.

From the 6 h2h meetings, Swindon lost just once to Accrington while picking 4 wins and a draw.

Evidently each of the three home fixtures in the series belong to the host on clear 2 or more goal margins.

And it will be worth noting that Accrington failed to score in those three visits to this ground.

This is a tight one to call since the newly promoted Swindon have already surprised a few teams at this ground. And at the same time, Accrington are performing above expectations and took a few scalps along the way.

Though, Accrington have not won at this stadium and each of their last three visits ended up in big defeats. Based on the stats and form analysis, a draw no bet on the home side is one of the better options.

I am also expecting some goals in this fixture even though the guests are yet to score a goal at this ground. The visitors have scored in all except once this season, while the last four games of Swindon saw a combined 18 goals. Thus both teams to score and over 2.5 goals are options despite the risks involved.