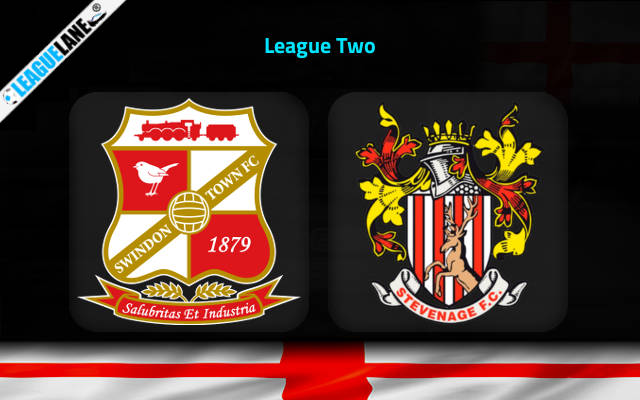 In game week 24 of League Two, Swindon Town faces Stevenage for their next match om Wednesday at Swindon.

Swindon Town is 8th on the league table with 33 points from 20 matches. They played their last match against Barrow which ended in a loss with 2-0 FT score.

Swindon has 9 wins, 6 draws and 5 losses so far in their league matches. The team has lost their last two matches and has kept a cold in last three games. From the last ten matches, Swindon has five wins and has scored in nine of the matches.

The team has played nine away matches so far in League Two this season but has only two wins in the matches. They have scored in seven of their home matches as well. Their last home match was against Harrogate Town, which ended in a draw with 1-1 FT score.

Stevenage is in 23rd position on the league table with 19 points from 21 matches. They played their last match against Salford City, which ended in loss after Stevenage failed to score in the match. The match ended with 1-0 FT score.

Stevenage is in the relegation zone with 4 wins, 7 draws and 10 losses from their league matches. They are currently on a 4-game cold streak and have lost in the last two matches as well. The team has only one win from their last ten matches and in six of the matches.

Swindon and Stevenage have exhibited poor performance in their last matches. But from both the teams Swindon Town has more chance for winning.

From the recent performance from Stevenage, they have not scored in their away matches. So the match may end with Swindon only scoring and under 2.5 goals odds.