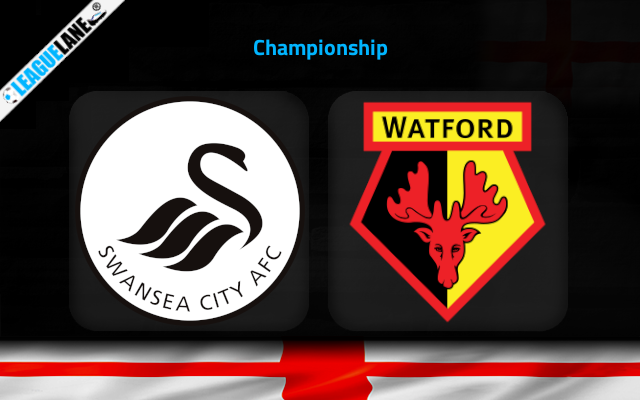 Swansea vs Watford Predictions and Free Tips from our expert tipsters when the teams go head-to-head in the England Championship on Saturday, 30 December 2022.

Swansea have been going through a disappointing form for quite some time now. They are on a seven-fixture winless streak. The Swans are currently at the 15th spot.

Despite of a recent dip in form, Watford are still inside the safe zone spot. They will be hoping to climb into one of those elite spot.

The past four overall wins were evenly split, with two each for either sides. The reverse fixture had finished in a 1-2 win for Swansea.

At this venue, The Swans won three, drew three and lost two in their total 9 clashes against Watford. Both teams to score option landed in the last two encounters.

Who will win the match between Swansea vs Watford?

The Swans have generally been better at home turf this season. They were unbeaten in five of the last six home outings. Do also note that four of those were victories.

On the other side, Watford have also been delivering impressive performances on the road lately. They are on a four-fixture unbeaten streak on the road.

For the above reasons, we are not selecting a winner from these two as both these sides are equally stronger at present.

Swansea have been also recording the same consistently of late. Therefore, expect an affair with under 2.5 goals ft.

Both the sides are having a defensive line which could leak at least one here. Their h2h tradition also suggests a similar scenario. Thus, expect this match to have under 2.5 goals ft.

For the main betting tip, we like to place the draw option at 3.13 odds since neither of these two have an upper hand based on the recent form.

Both teams to score at 1.83 odds seem to be a decent alternative for this clash.