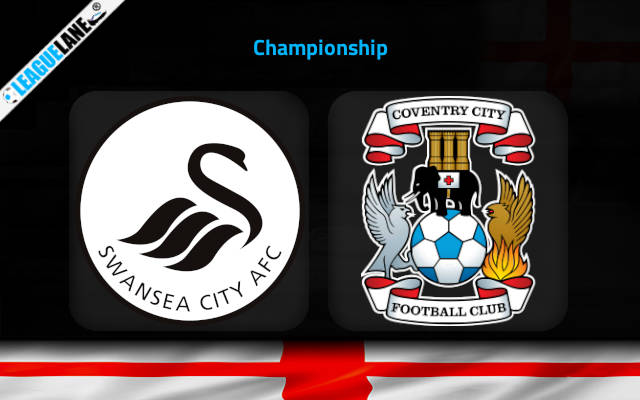 Coventry City will continue their pursuit for the promotional playoffs on Saturday afternoon when they travel to Swansea.com Stadium to battle Swansea City in the 36th round of Championship.

The Sky Blues are currently tenth in the league but there are only three points between them and sixth-placed Luton Town.

Mark Robins’ men will come into this tie on the back of two wins and a draw in the previous three games.

They, however, barely avoided a home defeat to mid-table rivals Preston North End on Saturday only thanks to substitute Fabio Tavares who found the late equalizer in the eighth minute of added time on the occasion.

However, we have to say that Coventry City will face quite a big challenge on Saturday in Wales considering how tough of an opposition Swansea City are in their own backyard.

Also, the Swans will come into this off of a fantastic showing in the 0ć-2 victory away at West Bromwich Albion on Monday night.

They have allowed the Baggies just one shot on target on the occasion at The Hawthorns. Last but not least, Swansea City have won three of the last four Championship outings on the home patch.

This is a super-important affair for the visitors but we are not quite optimistic regarding their chances of a three-pointer on Saturday in Wales. After all, the fact they have scored just two goals in the last six visits to Swansea City says enough.

However, since Coventry City have played well of late and since they go into this on the back of two wins and a draw in the last three affairs, we will chase the value in the 3.40 odds offered for the stalemate here.