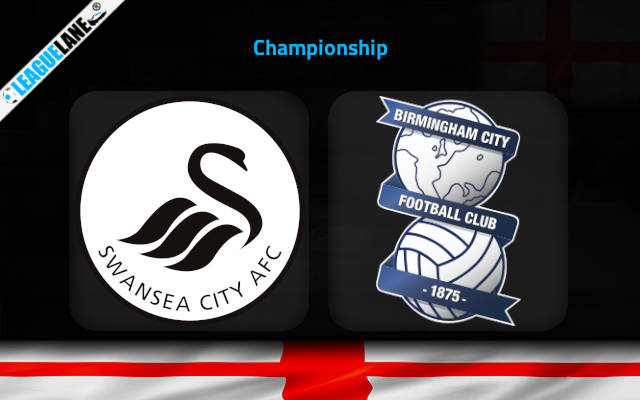 Swansea will continue their push for the promotional playoffs on Saturday afternoon when they host bottom-half Birmingham in the 30th round of the Championship.

The Swans picked up four points from the previous two away outings in the league and they are now ready to back up these showings in front of the home fans at Swansea.com Stadium.

The team led by Scottish manager Russell Martin held direct rivals QPR to a 1-1 draw in the previous round away at Loftus Road thanks to a second-half equalizer from Jay Fulton.

They then had a full two-week rest having earlier been eliminated from the FA Cup (a home defeat at the hands of Bristol City).

Unlike Swansea, Birmingham have been in action twice within the last seven days. They even played the extra-time on Tuesday evening, falling 0-1 at home to Blackburn Rovers in the FA Cup 4th round replay at St. Andrew’s.

On top of the fatigue factor, the Blues will play against the form as well here. They will travel to Wales off the back of five consecutive defeats in the Championship.

John Eustace’s men are now only six points above the relegation zone. The lack of defensive meticulousness has been the main reason for the losing thread since the Blues allowed at least two goals in four of the previous five Championship affairs.

Swansea will enter this game in much higher spirits and we believe their attacking line should have too much for the leaky Birmingham City defense on Saturday.

The value is strong with Swansea to win & Over 2.5 goals FT bet at the 3.10 odds, while we also like the hosts’ top scorer Joel Piroe to find the back of the net here at the odds of 2.75.