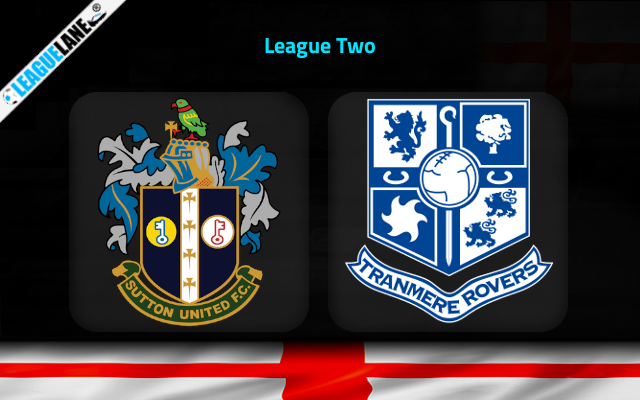 Sutton had many chances to secure a safe zone spot lately. They failed to occupy on a position inside as they dropped points in a couple of recent league fixtures. They are currently at 8th on the table with a total 57 points.

Sutton recorded a 2-1 defeat against Swindon on road in their most recent league fixture. With that defeat, they are now on the back of two subsequent negative displays in the league.

Tranmere have recorded some inconsistent displays of late. As a result. they are pushed out from the top three of the table. They will be eyeing for a top spot which they lost recently.

Tranmere will be hoping to make it three subsequent winning games in the league following a 2-0 win against Harrogate at home and a 3-2 win against Mansfield away from home. The above set of positive outcomes came after their winless streak of 5 league games.

By the looks of things, both these outfits will be desperate to record a win to secure their position on the table. Therefore, we expect an interesting League Two affair between these two outfits at Gander Green Lane on Saturday.

Sutton are unbeaten at this venue since October 2021. They are the third best home outfit behind Tranmere and Mansfield. They have an impressive offensive and defensive lineup too.

Tranmere, on the other side, are on the back of four subsequent on road defeats in the league. On road, Tranmere is possessing an inverse form of that they owns wearing the home outfit. Their disappointing offensive and defensive lineup adds more to the slump.

Considering the above stats, we expect a positive display from the hosting Sutton at the end of this one.