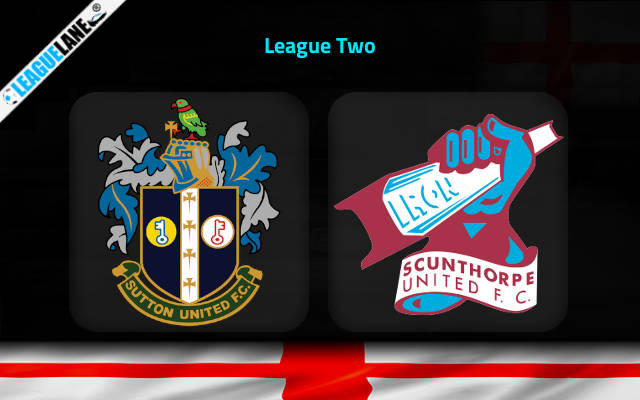 In game week 34 of League Two, Sutton United faces Scunthorpe United for their next match on Saturday at London.

Sutton United played against Hartlepool in their last match. Sutton could not keep the lead the team had got at the beginning of the match itself. Hartlepool scored in the second half of the match and evened the scoreboard. The match ended in a draw with 1-1 FT score.

Scunthorpe United played against Northampton Town in their last match. Both teams failed to score in the match, ending the game in a goalless draw.

Sutton had played well in their matches in this season. However, the team now has some trouble finding a win. Sutton will look to break their cold streak with a win in this match. They are winless in the last five matches and have failed to score in two of the matches as well. Currently, the team sits 6th on the league table with 51 points to their name and has a good chance of getting promoted to League One if they get back to their form.

Scunthorpe has played poorly in their matches throughout the season. The team has won in their matches only occasionally. Their poor performance has put the team dead last on the league table with only 23 points to their name. The last ten matches show the team has scored in only three of the matches and they have lost in seven of them as well.

Scunthorpe has played poorly in their matches this season. They will have a tough opponent in Sutton, even though Sutton has had a trouble with their form recently. Sutton can get back in to their form at any time and score wins in the match.

Sutton playing in their home ground against Scunthorpe, giving them an additional advantage. The team has not lost in their home matches since December. Scunthorpe, on the other hand, has only won in a single road trip in this season. Currently, the team has lost continuously in their last four away matches.

So, I believe the match will end in a win for Sutton United. Also, Sutton has a good chance to end the match with a clean sheet as well.