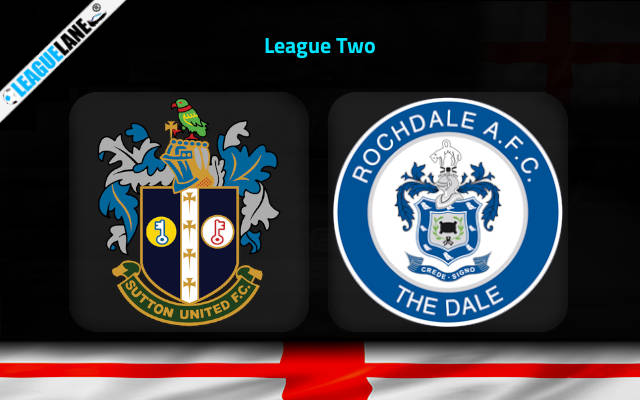 Sutton are in no way delivering with performances worthy of a team competing for promotion. However, with just a few points separating them from the automatic promotion spots, the club is looking for back to promotions.

In their most recent fixture, they registered a statement win against rock bottom of the table club, Scunthorpe United at home, with the match ending by a score line of 4-1.

The result was preceded by three wins and a loss for the club. Having managed just a point on average from those games, the club is now 5th in the league, two points behind the 3rd place team, with a game in hand over them.

Rochdale who were relegated from League One last season are showing no signs of getting anywhere close to the promotion picture. As a matter of fact, they are way closer to the relegation zone, than they are to the race for promotion.

In their most recent league games, they lost against Carlisle United in a 2-0 score line away from home. The result marked the club’s first loss in five league games.

With a couple of wins and draws preceding that loss, the club is now 17th in the league, sixteen points behind their opponents for this weekend.

Their only previous meeting ended 3-2 in favour of Rochdale earlier this season.

The Us have registered draws in four of their last five home games. However, all four of those results came against clubs in the top half of the table. Disregarding those four games, the club has won their last ten home games. Do not expect a club with just a win in their last nine fixtures, to challenge for points this Saturday.

The Dale have failed to score in the first half in any of their last nine league matches on the road. Their opponents meanwhile have scored five goals in that period in their last four home games. Therefore, expect the hosts to control the first half.