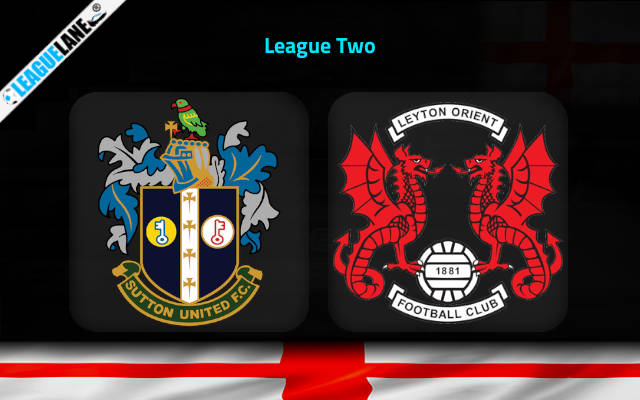 Sutton has got yet another loss in their tally after their last match. Sutton couldn’t get past Port Vale’s defences, while Port Vale netted twice in the match, ending the game with 2-0 FT score.

Leyton Orient has shown an improvement in their form in the recent matches. Before their win against Rochdale, Leyton had a cold streak, which had lasted for over fifteen matches. However, the team has achieved four wins in the last five matches, which has helped them to move up the table. The team now stands 14th on the league table and has got 49 points from their matches,

Leyton played their last match against Walsall, in which Leyton scored two back-to-back goals. Walsall couldn’t get past Leyton’s defences, ending the match with 2-0 FT score.

Sutton United has played moderately well in their matches this season. After the rocky start to the season, the team made their way. However, in the most recent matches, the team is in a bit of trouble with their form. They have lost in three of the last five matches. Leyton Orient has shown an improvement in their form in the recent matches and has achieved four wins from the last five matches. They scored over 1.5 goals in the matches as well.

Looking at the records, the match will most likely end in a win for Leyton. Both teams have scored in their recent matches and can be expected to score in this match as well, ending the match with over 2.5 goals.