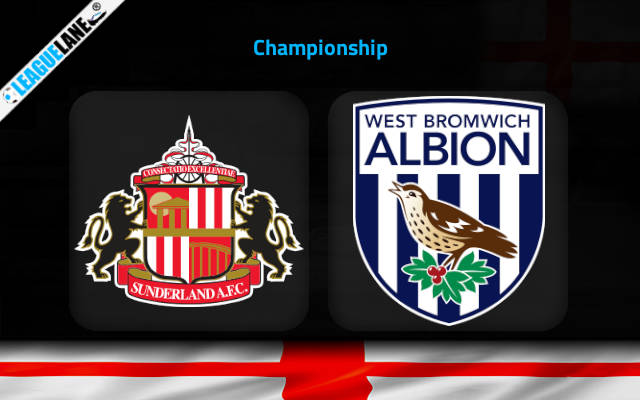 Sunderland vs West Bromwich Albion Predictions and Free Tips from our expert tipsters when the teams go head-to-head in the EFL Championship on Monday, 12 December 2022.

Sunderland continued their strong form under new manager Tony Mowbray
with a 3-0 win over Millwall last Saturday. This helps them stay 3 points behind the promotion zone.

West Brom also saw a change in fortunes under Spanish coach Carlos Corberan as they won three games on the bounce just before the World Cup break. The Baggies remain in the relegation zone, but a win here can take them to safety.

The teams last met during their time together in the English Premier League from 2008 to 2017. West Brom are unbeaten in the last six h2hs, however they won just two of those games with the remaining four ending in stalemates.

Sunderland on their own backyard is unbeaten in four h2h meetings against West Brom with 1 win and 3 draws.

Their last 5 head-to-head meetings across all venues and the latest 4 at the Stadium of Light saw under 2.5 goals.

Who will win the match between Sunderland and West Bromwich Albion?

It is very difficult to pick a clear winner here with both teams finding strong form under new managers. A draw is the most probable outcome, yet Sunderland holds a slim edge having restarted their campaign with a comfortable win against Millwall last week. Meantime, this is West Brom’s first competitive game after the 2-0 win against Stroke City a month ago.

Though the teams are sitting at the opposite end of the table, there is little to separate them on current form. Combined this with our full-time result analysis, there is a high chance for this match to end in a draw.

Goals are expected at a premium with their recent h2h showing a similar trend and therefore under 2.5 goals is a safe bet for this EFL Championship fixture.