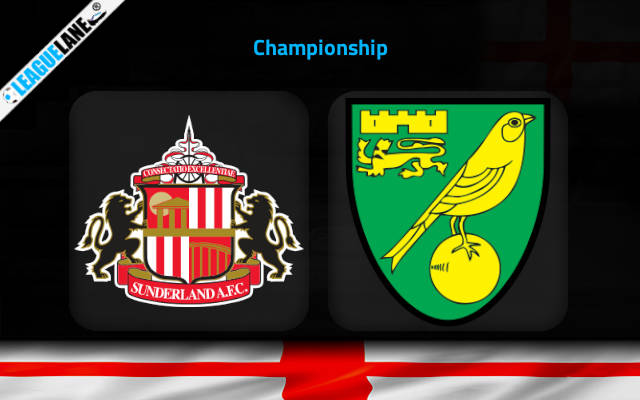 Sunderland will lock horns with Norwich for matchday 6 in the EFL Championship. Both teams are currently separated by one point in the league table.

The Black Cats started the season brilliantly under manager Alex Neil losing only one game in their last five league outings. The Black Cats striker Ross Stewart has found the back of the net three times in his last five appearances so far this season.

Meanwhile, Norwich City is at the eighth position in the league table – most football fans know that the Canaries often oscillate between the Premier League and the EFL Championship.

Dean Smith will also encourage his boys to score goals, as it will improve their chances of winning.

The supporters of the visiting side were left disappointed last night as they lost to Bournemouth in the second round of the EFL Cup. In that game, Brooklyn Genesini scored the dramatic equalizer which took the game into penalties.

Alex Neil’s side won against a determined Stoke City last week, Ross Stewart scored the only goal in the 45th minute of the game.

Going into this game, Ross Stewart has found the back of the net three times in his last four league appearances for the Black Cats.

Hence manager Alex Neil will hope for more such goal-scoring form from the number 14.

The Canaries also possess the firepower in their number 24 Josh Sargent, who is currently on a goal-scoring streak with three goals in his last two games.

Considering the above stats we see this game ending in a stalemate at FT- this will be at an odd of 3.40.

Our next tip will be that this game will see Ross Stewart to score anytime @ 2.87 odd. This is considering the goal-scoring streak of the striker.