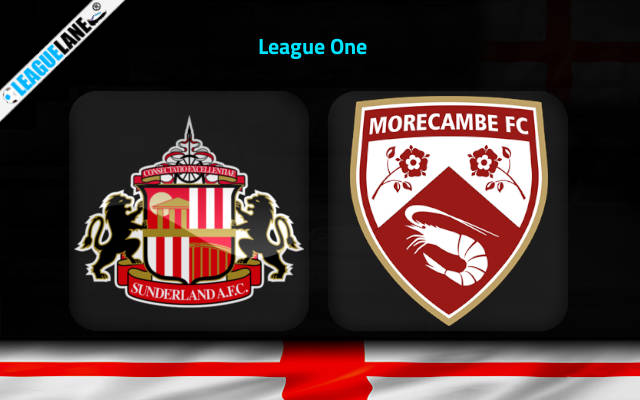 Sunderland is in the zone for getting a promotion to League One play offs while Morecambe is at the brink of getting into the relegation zone. With a recent draw in the previous match, the hosts are set to welcome the visitors at Stadium of Light hoping for a victory in front of their fans. Meanwhile, the visitors expect even a draw against the powerful home side.

The Black Cats are at the 5th spot with 36 points from 19 matches. They won on 11 occasions while drawing on 3 and the number of losses stands at 5. They scored 31 goals while conceding 24. Their previous match against Oxford ended in a 11-1 draw.

Momentum is really building for Sunderland as they have now gone 4 games without losing. They have won 2 of the last 5 games while displaying tremendous home performance, unbeaten in 8 out of 9 home games.

The Shrimps are at the 20th spot having gained only 19 points from 19 matches. They have the highest number in losses pointing at 10 while having 4 draws and 5 wins.
They lost the previous game at home by 0-4 against MK Dons.

Morecambe has been scored against in 6 of their last 6 matches, letting opponents get 14 goals overall. They have failed to win 7of their 9 away league games and has only picked up 4 points from the last 5 games with 0.8 points per game on average.

Lee Johnson’s Sunderland is in excellent home form while the visitors are performing poor at away schedules. The Shrimps ground out a 1-0 win against tier eight opponents, Buxton in the FA Cup last time out, which in itself is a sign of struggle for the visitors.

In league action, Morecambe have won just once since the end of September and that looks set to continue here against one of the strongest sides in this division. Therefore, we envisage a home win this Tuesday although scoring from both sides can be expected.