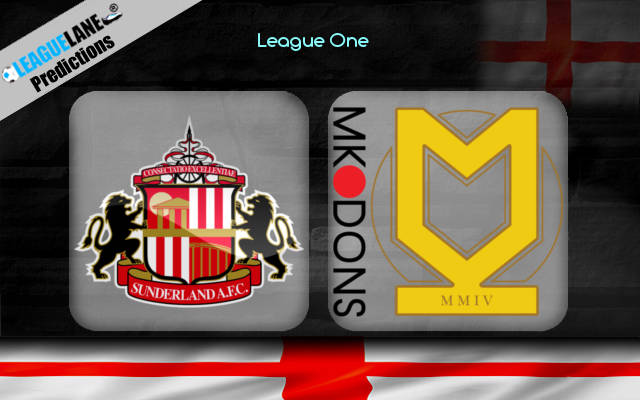 Sunderland has lost only one of their 10 league clashes so far this season. Their only loss came at home, and they have been unbeaten in the three matches after that defeat. The Black Cats are on a two-game winning streak in the campaign, following a 2-1 win at home against Ipswich Town in the schedule.

MK Dons is not at their best form in the league this term, and just 2 wins in 11 clashes is a clear example of their current form. They are unbeaten for the last three fixtures in the league, following a goalless draw on the road against Northampton in the schedule.

Sunderland is on a two-game winning streak in the campaign and has been unbeaten in the recent three fixtures in the schedule. With their current form in the league, we can back the host to get something out of the upcoming match in League One.

MK Dons have been unbeaten in their last four matches across all major competitions. But their recent three fixtures have ended in a draw, which is why their form is confusing in the campaign. Besides, the visitor hasn’t won in any of their h2h meetings with the host.

The tip for over 1.5 goals will come in handy as both teams are in decent scoring form and we can expect a couple of goals in ninety minutes. Apart from that, the tip for Sunderland to win either half of the clash will probably be the best bet for the punters.