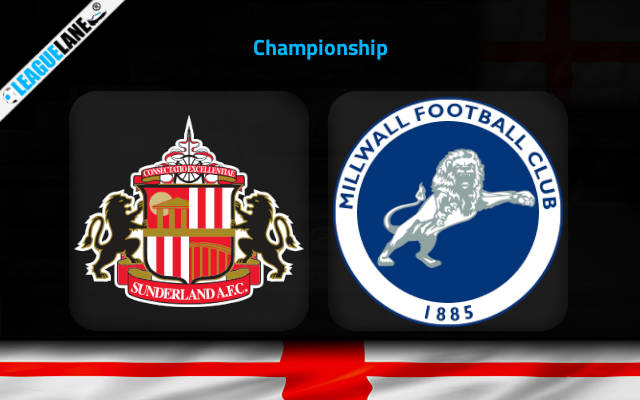 Stakes will be high for Sunderland as they will host Millwall at the Stadium of Light this Saturday.

The hosts are having a mixed form this season. They are losing every alternate game in the Championship.

In their most recent outing, Black Cats suffered a narrow 1-0 defeat against Middlesbrough. Riley McGree scored the only goal in the 25th minute. As a result, the host suffered their third defeat of the season.

Tony Mowbray’s side finds themselves in the eighth position as match-day 8 concluded. If they manage to take all three points in this upcoming fixture they can reach the top-four in the table.

Meanwhile, the visitors ended their three-game losing streak. In their most recent league outing, Lions managed to beat Cardiff City by 2-0. In that game, Charlie Cresswell and Benik Afobhe scored two goals with thirty minutes remaining before full time.

They also managed to keep a clean sheet as well. Do note that Gary Rowett ‘s side have lost three of their last five games. They also conceded eleven goals this season.

Moreover, only one game ended in a stalemate for the visitors this season.

Despite losing three of their five games, Tony Mowbray’s team are only two wins away from claiming the top spot in the table. Hence this fixture has all the possibility to end in a high-scoring game.

The host managed to score eleven goals this season. Also, Ross Stewart is in great goal-scoring form. He has scored three goals in his last three appearances for the club.

Our prediction for this game is that Sunderland will win this game with BTTS – at 4.75 odd. This is after considering that the team have won two of their last five games.

Moreover, our next tip for this game is that Ross Stewart to score anytime – at 2.60 odd. So far the number nine has scored five goals in his last seven matches for Black Cats.