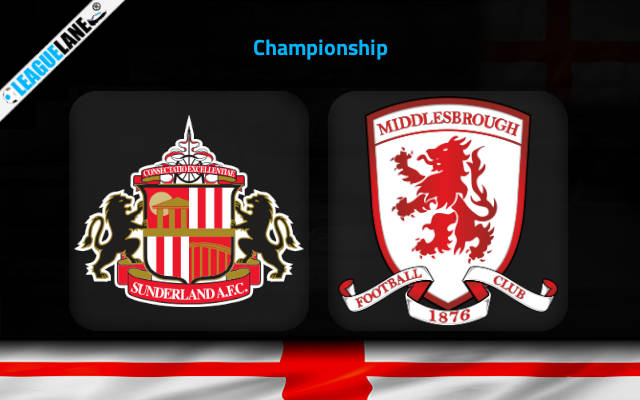 Sunderland and Middlesbrough will wrap up the Matchday No 28 action in English Championship with their Tees-Wear derby on Sunday exactly at noon at Stadium of Light.

Boro will enter the tie in higher spirits having won four games on the spin. Their latest victims were Millwall in the last weekend’s 1-0 win at Riverside Stadium.

Michael Forss scored the only goal for Middlesbrough on the occasion. Head coach Michael Carrick was pleased to see his men keeping a clean sheet after a tough defeat on the home patch to Brighton two weeks ago in the FA Cup.

Boro are enjoying an extraordinary attacking form under Carrick. They bagged at least two goals in three of the last four league fixtures.

The mentioned four-win streak brought them up to the fourth position in the Championship table.

While they are 12 points behind second-placed Sheffield United and the potential battle for the automatic promotion, there is still a lot to play for before the end of the season.

Middlesbrough will be extra-motivated to claim the spoils on Sunday in the derby against neighboring Sunderland.

The Black Cats are also enjoying a decent campaign in this term of the Championship. However, they will go into this off the back of a 1-3 defeat at the hands of Swansea at Stadium of Light.

Center-back Luke O’Nien was the main man to be blamed as his 13th-minute red card set the pace of the game on the occasion.

Both Sunderland and Boro have been quite efficient in the final third in the recent games and we have reasons to expect goals when they come across each other in the Tees-Wear derby. Each of the last seven matches the Black Cats played in all competitions produced goals at both ends.

However, we still see Boro as the favorites for the win which is why we will take Middlesbrough to win & Both Teams To Score as the main pick at the odds of 5.00.