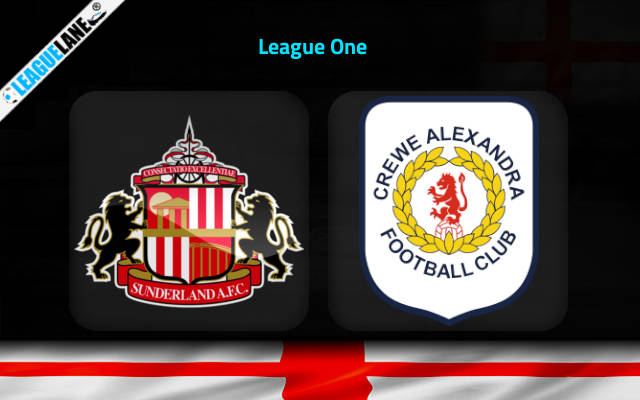 Game week 38 of League One brings us the match between Sunderland and Crewe Alexandra on Saturday at Sunderland.

Sunderland played their last match against Fleetwood Town. Sunderland started their scoring in the second half of the match and had a lead of two goals by the end of the 90 minutes. The match ended with 3-1 FT score.

Crewe Alexandra had added another loss to their tally after their match against Portsmouth. The team could score only a goal in the match and that too at the end of the match. The match ended with 1-3 FT score.

Sunderland is back on track and is currently unbeaten in their last four matches. They have kept their form since their match against Wigan Athletic. The team stands 5th on the league table and has earned 63 points from their matches.

Crewe Alexandra has exhibited a poor performance in their matches. From the last ten matches, the team found win in only one of the match and has lost in the remaining matches. They are dead last on the league table with only 25 points in their name.

Even though Sunderland had some trouble with their form in some of the matches, they are back at it again. The team is unbeaten in the last four matches. Crewe is the opposite of Sunderland when it comes to the team’s performance. They have lost in most of their matches.

Sunderland’s most recent home match has put an end to their cold streak. They hope to earn the win in this match to achieve an unbeaten streak. Crewe’s away matches have not produced the results the team had hoped for. They have only two wins to show from their away matches in League One.

So, the match will most likely end in a win for Sunderland. Ross Cameron Stewart has contributed to most of the wins of Sunderland and can be expected to score any time in this match as well.