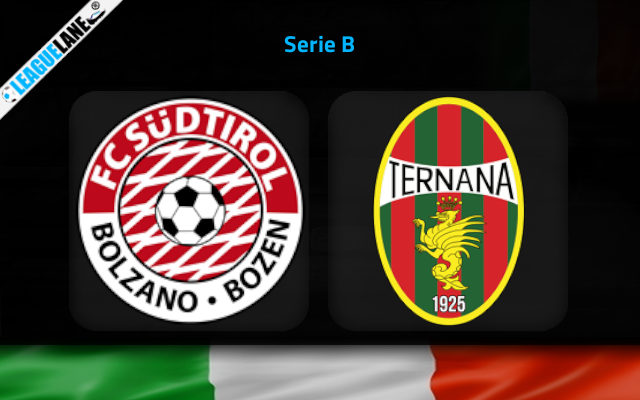 Sudtirol vs Ternana Predictions and Free Tips from our expert tipsters when the teams go head-to-head in the Italy Serie B on Sunday, 11 December 2022.

Sudtirol are on a six-fixture winless streak and have dropped to 9th position in the league standings. They will be hoping to regain their lost safe zone spot by bagging points further.

Their Saturday’s counterparts, Ternana are currently 5th in the league table. Being in the safe zone, they will be looking to secure their spot inside it.

They have only met two times in the past. Sudtirol have managed to evade a defeat in both the meetings.

The latest meeting had finished in a 1-1 draw. Both teams to score option landed in all the meetings between these two.

Who will win the match between Sudtirol vs Ternana?

Sudtirol have been recording draws consistently of late. Four of their past five home outings had finished in a draw.

On the other side, Ternana are on a two-fixture losing streak on the road. They were having a four-game unbeaten streak before recording back-to-back defeats in the last two matches.

By the looks of things, it will be a tight call since neither of these two displays a potential to seal a win. Sudtirol will have a slight edge as they are on a seven-game unbeaten run at home.

Matches involving both these teams have generally had over 2.5 goals ft lately. They both have been recording matches with over 2.5 goals at respective patches too.

For all the above reasons, expect goals over 2.5 in this match-up between Sudtirol and Ternana on Saturday.

On top of that, their head to head recordings also suggests a both teams scoring affair. Therefore, expect goals from both ends at Stadio Marco Druso.

It is clear that the home team has a slight advantage from the above observations. But we cannot see them as a clear winner since they have been recording drawn outcomes consistently.