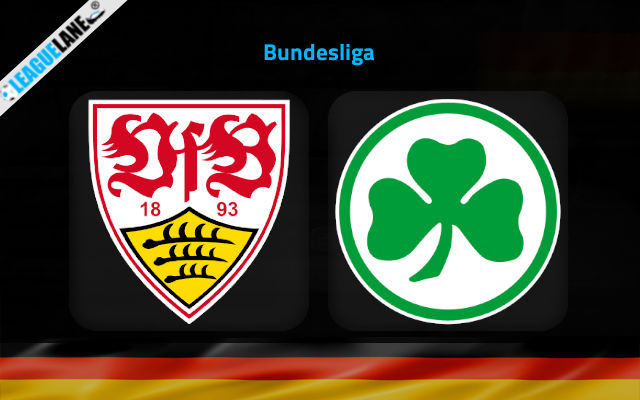 Stuttgart made a phenomenal start to their 2020/21 Bundesliga campaign, losing only twice in the opening twelve rounds.

They saw off Borussia Dortmund 5-1 at home in the process and maintained the high level of game all until the final quarter of the season.

A run of six defeats in the last nine league fixtures moved them out of contention for European spots and sent them more into mid-table positions.

Nevertheless, Die Schwaben look ready to attack these European places in the 2021/22 season.

They have the weapons to successfully build on the previous campaign and get off to another strong start.

The clash with the newly-promoted Greuther Furth should really provide the hosts with a nice opportunity to begin the season with a three-pointer.

The visitors will enjoy their only second top-flight appearance in this term of Bundesliga, having earned the runners-up spot in the previous term of 2. Bundesliga after beating Fortuna Dusseldorf 3-2 on the final Matchday.

Furth kept the core of the last season’s team and signed some exciting Bayern Munich academy products, but will it be enough for a stress-free season at this level?

Stuttgart lead the head to head tie by two wins going into the 11th meeting with Greuther Furth.

Interestingly, none of the past ten H2H games between the two sides ended without a winner.

Just one of these ten outings saw goals scored at both ends.

The teams picked up a home win apiece when they last met each other, in the 2019/20 2. Bundesliga season.

Furth looked super vulnerable defensively in pre-season. They shipped two or more goals in each of the last three matches. The 2-2 draw to Hoffenheim was followed by a 2-3 loss to Fenerbahce and a disappointing elimination at the start of the DFB Pokal run (a 2-3 defeat) at the hands of lower-division Babelsberg.

This will be the music to the ears of Sasa Kalajdzic, Borna Sosa, and company who do head into the game as pretty clear favorites in our eyes. The home win should be a banker bet at the odds of 1.80.